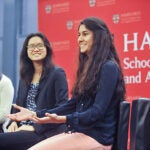 Astrophysicist looks beyond test flight to asteroids and Mars

On Friday, NASA successfully launched its next-generation spaceship farther than any astronaut has flown since the Apollo program of the 1960s. Though the Orion was unmanned during the test flight, which took it 15 times higher than the Space Station orbits, it is designed to eventually carry a human crew on missions to the moon, to near-Earth asteroids, and even to Mars.

Jonathan McDowell, a scientist with the Harvard-Smithsonian Center for Astrophysics, works on the Chandra X-ray Observatory and also publishes Jonathan’s Space Report, a Web newsletter that focuses on launches of all kinds, manned and unmanned. He answered questions from the Gazette on the test flight, the goals of the Orion effort, and the rationale behind mounting a mission to a near-Earth asteroid.

GAZETTE: I’ve heard this launch mentioned as the beginning of a new era. Do you think that’s true?

So, it’s really the American human spaceflight program that has been perhaps faltering, partly due to problems with the way NASA approached things, and partly due to political indecisiveness.

GAZETTE: Even though computerization and technology have advanced very rapidly since, it seems we’re still catching up to Apollo and, with Orion, we’ve taken a baby step.

McDOWELL: The Orion spacecraft is a lot more sophisticated than Apollo. It’s bigger, can carry more people. Once they build the service module, which they haven’t done yet, it will have solar panels, it will be able to last longer. Apollo was: “Let’s get someone to the moon and back alive.” Orion is: “Let’s develop the infrastructure and the capability to gad about the solar system and have a spacecraft that can operate for months, have a spacecraft that can have a bigger safety margin than Apollo did.”

It’s just amazing that we didn’t lose an Apollo mission in space. Apollo 13 was a close thing. Those folks were really brave. One can hope that there’s just a little more margin in Orion in terms of life-support systems. We have a little more understanding now after decades of operating the shuttle. In every year of the shuttle program, we launched more people into Earth orbit than in the entire Mercury-Gemini-Apollo programs combined. And so just the number of astronaut flight hours that we’ve had and even astronaut rocket propulsion minutes — getting to orbit and back — is so much bigger than we had with Apollo. So there’s a maturity with the processes now.

This is something that can get to the moon like Apollo could get to the moon, just as your 2014 Honda Civic can get you to the grocery store much like the Model T could have done. But there’s still a big difference between them.

That’s one aspect of this. The thing that we’re still missing is a good cheap way to get to space. And we’re limited. Orion is a compromise, because even this enormous SLS [space launch system] booster that they’re planning to get Orion to the moon can’t carry as much mass as you’d like. They’re going to various extremes to cut the weight to the bone.

You have to have these immensely expensive SLS rockets that are still not as big as you’d like. Many people hope that the development that Space X is doing with their Falcon series of rockets will lead to something more affordable.

GAZETTE: Is that because the SLS wasn’t designed anew? It uses off-the-shelf shuttle boosters in its rocket?

McDOWELL: There’s some of that, yes, and it’s designed both using existing technology and with the existing processes and approaches, sort of the old NASA way. I think there’s starting to be an awareness, even in the SLS program, [that they have] to tweak that and see what they can do to make it more affordable.

But there are constraints: “You can build it anywhere you want, as long as the jobs go to Alabama or Utah.” It’s very much influenced by political considerations of who gets the contract. “What’s the best way to get us to Mars?” is not necessarily the first constraint.

GAZETTE: Can you address the idea of Orion visiting a near-Earth asteroid before any trip to Mars?

McDOWELL: There are a number of reasons to be interested in near-Earth asteroids. Everyone knows there are these rocks between Mars and Jupiter called the asteroid belt. But there are also a smaller number of objects that are from maybe 10 miles across at the biggest, down to a few yards across. And these things litter the inner solar system.

Most of them, over the billions of years of the solar system, have been soaked up by the planets, making big craters. That’s why the moon is covered by these big round holes. But there’s still a few left, and there’s some concern they might make a few more holes.

One reason for being concerned with asteroids is the danger of them hitting us. Another reason is that some of them have heavy deposits of valuable minerals, like rare earth elements, and you might want to mine them. And a third scientific reason is that they may be relatively unchanged from the early solar system and give us insight into how the Earth itself formed.

It’s going to take a voyage of years to get to Mars [and] if anything goes wrong, you’re in big trouble, because you’re a long way from home. With asteroids, you’re maybe weeks to months to get there. So it’s longer than the three days to the moon, but it’s still a much more manageable trip time.

GAZETTE: Is there a point at which you will be disappointed if this vehicle hasn’t taken us to Mars? Or is Mars sort of a reach goal?

McDOWELL: Personally, I think Mars is a reach goal for Orion. I don’t think that NASA has a budgetarily realistic plan to get to Mars in the foreseeable future. But I think if we keep tweaking things and [start doing] what we haven’t been doing, [which] is investing in advanced technology development, we may be able to improve the rockets and the systems enough to get something practical to Mars.

GAZETTE: They’re talking about Mars in the 2040s. That seems like a long way away.

McDOWELL: It’s not a definite plan, but it’s hard to see it happening any earlier than the 2030s and it’s easy to see it slipping to the 2050s, but not much beyond that. So I would say that’s sort of the right timeframe to imagine a human Mars expedition, if we don’t somehow lose interest in human space exploration.

GAZETTE: Do we have the technology to go now, if the budgetary and political will was there?

McDOWELL: I think we’re not far off. You know, one of the great things we’re discovering on the space station is how often things break. There’s this oxygen-regeneration system and the urine-recycling system and things like that which had unexpected “failure modes” that they were able to fix with [help from] cargo ships. You can’t do that if you’re halfway to Mars when the thing breaks.

You need to build your Mars ship and operate it in Earth orbit for a few years — operate several of them — to get experience in how they break, until you’re confident that you can send one out to Mars on a long trip without too much breaking down on the way.

I think we’re starting to understand that there’s all this research you have to do. We don’t really know, right now, how to land a big enough vehicle on Mars. Mars is a hard place to land because the atmosphere is too thin for parachutes to really do the job, and too thick to just use rocket engines on the way down. So you have to use a mix of methods, and it’s complicated. The heavier vehicle you have, the harder it is to get it right.

So there’s some basic technology that we still [have] got to develop and we’re a ways off from being able to do the Mars mission. [We’re] not so far from being able to do a Phobos mission, which is one of the moons of Mars. Getting down into Mars’ gravity well and back up is what’s really hard. If you can make the long duration vehicle work OK, maybe you can go to Phobos and back just to say you’ve been there.