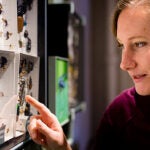 The large number of deaths from the Ebola virus is primarily due to the lack of sufficient medical care where it’s needed most, Partners In Health’s Paul Farmer said at a public forum Monday.

Farmer, a Harvard professor and physician who has devoted his life to bringing health care to the poorest regions of Haiti, Africa, and other parts of the world, drew attention to inaccurate perceptions around the spread of the epidemic, which has killed more than 6,000 people in 2014, mostly in Liberia and Sierra Leone.

Joining Farmer on the panel at Cambridge’s First Parish Church were Harvard’s Evelynn Hammonds, the Barbara Gutmann Rosenkrantz Professor of the History of Science and of African and African-American Studies; Ahmed Ragab, Richard T. Watson Assistant Professor of Science and Religion at Harvard Divinity School (HDS) and director of the Science, Religion, and Culture Program (SRC) at HDS; and David Jones, the A. Bernard Ackerman Professor of the Culture of Medicine at Harvard Medical School (HMS).

The forum prompted serious reflection about structural inequalities and how public perceptions get shaped, which often leads to how resources are directed. “The cost of believing that something is so lethal and fatal is significant,” Farmer said.

Hammonds drew attention to how perceptions of risk about Ebola had been shaped mostly through the media, while noting that epidemics “pull the covers off” the ways that the poor, vulnerable, and sick are perceived.

Farmer, who is the co-founder of Partners In Health, declared that rebuilding health systems has been his “biggest major commitment” in the last decade.

“We don’t make pledges lightly. This is a significant endeavor,” he stated. “We are looking for support.”

Ragab suggested that Harvard can engage more with the wider community, which was why the forum was held off campus at First Parish Church.

In a discussion that lasted more than 90 minutes, Farmer said that nobody should be dying of Ebola.

“If we had the staff, stuff, space, and systems, we could get people earlier into a place where they could get supportive care,” he said. To date, most Americans stricken with Ebola have survived because they were “scooped out” of miserable conditions, he said.

“I wouldn’t want to get care there. If I were to get Ebola, I would want to be airlifted back here ASAP. Or maybe to Europe,” he said.

What sped the spread of the disease, according to Farmer, was the lack of a health system that could provide adequate care. About 90 to 95 percent of Liberia does not have electricity, and there is a “tremendous amount of work” to be done to get the systems even to a level of mediocrity, he stated.

The forum was organized by the SRC Program at HDS and the Ackerman Program on Medicine and Culture at HMS.