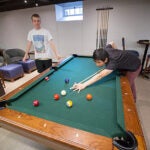 Walking through a sea of young students crowding the stage of Science Center B, Howard Stone neatly created order out of chaos, pairing children as he passed.

The exercise, pairing students who had been assigned letters representing the genetic code — A’s with T’s, and G’s with C’s — resulted in their creating a human double helix, neatly reflecting the complex sequencing that creates every living thing.

“Our goal today is to help convince you that the world is an amazing place,” Stone said, speaking to hundreds of community and family members from Cambridge, Boston, and the surrounding area at the annual School of Engineering and Applied Sciences (SEAS) holiday lecture on Saturday. “And that science and scientific ideas can help us understand so many things about the world.”

With the help of children in the audience, Stone and his colleagues explored the history and science of DNA in two lectures titled “DNA: A Detective Story.” Children helped scientists to separate out strawberry DNA, explored DNA sequences for hissing cockroaches and butterflies, learned how scientists cracked the universal code and structure of DNA, and, in the final demonstration, showed how DNA copied itself.

“It was wonderful,” said Mary Afari-Aikins, who brought her children John, 8, and Anneliese, 7, to the event. “It was so much more than I expected. This was our first time, and it’s a great opportunity. Everyone got to participate, and it excites them for their future.”

“I liked learning about molecules,” said John, who took to the stage to create the double-helix demonstration. Noting that he wants to be a scientist when he grows up, he said, “My two favorite subjects are chemistry and engineering, so this was fun.”

Begun in 2002 by Stone when he was a faculty member at Harvard, the annual two-session event now attracts 800 attendees. Anna Shneidman, a sixth-year Ph.D. student in the chemistry department, has participated for the past four years.

“I look forward to it every year,” she said. “I love seeing the demos because they’re always exciting and interesting. I also really love interacting with kids, seeing how they react. They really get the idea that they can be a detective and solve a mystery.”

Kathryn Hollar, director of educational programs at SEAS, said one of the benefits of the holiday lecture is that children and parents can come to the weekend sessions together and then discuss what they learned at home.

“It’s great to have families come and learn about science,” she said. “It’s an important way to get kids interested in science. It’s great to see so many families returning year after year. We try to make it really accessible and open to everyone.”

“Math and science are sometimes considered unreachable for kids,” Shneidman said. “It’s as if it’s OK to not understand math or to say ‘I’m not good at it.’ But events like this show that it’s within reach, and it’s a lot of fun.”