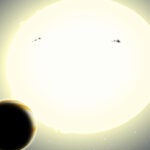 Kepler ‘rising from the ashes’

In Eve Ensler’s latest play, “O.P.C.,” the protagonist struggles to define a new way of living by confronting what she sees as society’s obsession with overconsumption. The young woman, named Romi, is driven by her belief that society is losing time in which to address the mounting ecological crisis. It is this sense of urgency that people immersed in the science around climate change can’t help but live with, said Naomi Klein, an author and syndicated columnist.

In her latest book, “This Changes Everything: Capitalism vs. the Climate,” Klein writes that “we lack the collective spaces in which to confront the raw terror of ecocide.” Speaking after a Wednesday matinee performance at the American Repertory Theater (A.R.T.), Klein noted that Ensler’s play is one space where people are forced to confront that raw terror, and she hopes it will spark conversation on how to chart a path forward.

At several points in the play, Romi challenges her mother, a successful politician, by rejecting the conventional expectation that people must “do” to contribute and find success. On the same day on which New York Gov. Andrew Cuomo announced his state would ban fracking due to public health concerns, Klein responded to Romi’s struggle by saying she felt today “the idea of ‘doing’ is good … let’s do stuff.”

Klein noted how important it is for environmental groups to become “the solutions movement” by not only fighting against what they don’t want, but for they do want. For example, the anti-fracking movement recently shifted toward mapping solutions, Klein noted, by showing how New York could power the state entirely with renewables, based on research from Stanford University that showed the technology exists to achieve that shift completely by 2030.

The A.R.T.’s post-performance discussions are aimed at leveraging Harvard’s intellectual resources by working with scholars, activists, and artists to provide audiences with the opportunity to participate in extended dialogues about the questions raised by work presented on the theater’s stages. “The A.R.T. was honored to include journalist and author Naomi Klein in our ‘O.P.C.’ post-performance discussion series,” said Ryan McKittrick., the A.R.T.’s director of artistic programs. “Her talk allowed our audience, including many students, to connect this play with events that were unfolding that very morning in the news.”

The discussion with Klein explored the ways in which many environmental activists struggle to find meaningful engagement. Klein spoke about how the environmental movement historically has focused on individual consumption, on “making your own life this piece of low-carbon performance art,” as opposed to collective action. Despite the triumph of this model that sees people as consumers, there is a recent resurgence in the belief in collective action as seen through the environmental justice and divestment movements, she said.

The balancing act between individual and collective action is one both Klein and Ensler asked the audience to consider. “It is not that what we do individually doesn’t matter,” Klein noted. “We all have to strive to bring our actions in line with our values and our beliefs. But the truth is we can be perfect people and the system will still bring us over the cliff. Neither of these two poles represents the pathway.

“If you don’t believe it is possible for large groups of disenfranchised people to occasionally grab the wheel of history and turn it, then you will feel incredible despair in this moment,” she said. But there is a path out of the climate crisis, and as long as it is physically possible to prevent catastrophic warming, even though it may be incredibly hard, then there is an ethical responsibility to try to improve the chances, rather than spread despair.

Klein pointed to the excitement she feels experiencing the creativity with which people, whether artists or scientists, are figuring out what they can do based on their skill sets. The key thing, she noted, is to “get over this idea that any of us can do it on our own.”

“I really have to believe there is a way we can share this planet and live more gently and equitably on it,” Klein said, “… and if we do it with justice at the center I think people’s lives can be better.”