A spark for young minds 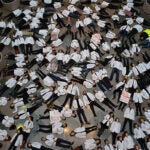 “Nothing inspires first-graders more than blowing things up,” Cardriche said, picking up a balloon covered in small, dark marks. “A regular balloon explodes when you light it on fire. But if you fill a balloon with a little bit of water, the water acts as a shield and it warms before the balloon pops … so it actually burns the balloon instead of popping it.”

Cardriche and other Harvard undergrads were on hand Dec. 7 to help showcase work that was accomplished over the past 10 weeks as part of the Ed Portal’s mentoring program. In a service that is free to Allston-Brighton residents, 26 Harvard undergrads mentor 102 local students from first through 12th grade in fields such as math, creative writing, and science.

“Inspiring children is one of the best takeaways,” said Cardriche, an applied math concentrator who facilitated a science club for first-graders at the Ed Portal.

“She’s certainly never programmed anything before,” said Anderson, adding that her daughter had been involved with the mentoring program since first grade. “She’s learning a new skill, and she has a lot of fun — it’s fun learning.”

“Being here gives you an idea of how much of an impact working with the mentors has had,” he said. “The undergraduate students here have a long history of being socially engaged, but we’re seeing the growing realization that it’s a mutually enriching exchange. It’s a learning opportunity for everyone involved. What we may have traditionally thought of as service becomes much more of a partnership.”

Speaking of her work in writing and the visual arts with sixth- and eighth-graders, mentor Ujunwa Nwosu ’17 echoed that sentiment.

“I learned a lot from my students — just about teaching and how to connect with someone,” said Nwosu, a neurobiology concentrator. “This was my first semester doing it, and it was a great experience. I’m definitely coming back because I loved it so much.”

Such learning opportunities will expand dramatically when the Ed Portal moves into its new facility in February. The new digs at 224 Western Ave. in Allston will include flexible-use spaces, creating opportunities for performing arts events, an art gallery, and deeper programming. The new space will also expand the relationship between HarvardX and the Ed Portal and build upon the new educational initiative HarvardX for Allston.

“The iStudio at the Ed Portal will take the best of what we know about digital learning, and bring people together in the local community,” Lue said. “We’ll take everything we’ve learned about digital resources and media, and bring that to the community as a re-imagining of what a community space can be like — a 21st-century version of that communal space. We’ve experimented with it here, in this space, but I think that will really be quite something.”