A leap across the pond 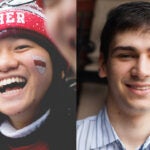 Michael George ’15 says his passion is a personal one. Growing up in the Philippines, George lived a divided life — his parents’ employers would pay for him to go to a private American school, while his best friend took a Jeepney to the local school. George left the Philippines for Harvard, while his friend stayed behind — and that’s stayed with him.

“As an American who grew up overseas in the developing world, it was eye-opening for me to move home and realize that, in one of the richest countries in world, 1 in 4 children live in poverty and that 1 out of 4 will remain there as adults,” he said.

When George departs Harvard, he’ll head to England on a prestigious Marshall Scholarship to study comparative social policy at the University of Oxford and economic history at the London School of Economics.

Anna Hagen ’15 will be nearby. Hagen, an English concentrator by way of Brooklyn, “fell in love with language as a kid.” Along with her study of literature, Hagen has immersed herself in theater at Harvard. After the Boston Marathon bombings, she produced Euripides’ “The Bacchae,” she said, “not only because I wanted to make sense of its frenzied chorus and long, poetic messenger speeches, but because I felt in need of the play’s strength and exuberance.”

Under the direction of Professor Amy Hempel, Hagen is working on a book of short stories for her senior thesis; with her Marshall Scholarship she plans to pursue a master’s degree in contemporary English literature at the University of Cambridge and a secondary master’s degree in theater marking at the Royal Academy of Dramatic Art.

“I’m passionate about storytelling, and the Marshall means the chance to think about what stories I want to tell, and how best to tell them,” said Hagen. “I look forward to immersing myself in another culture and learning from a vibrant community of friends and scholars. I expect the next two years to be life-changing.”

Up to 40 students are selected annually for Marshall Scholarships, which support young Americans in graduate studies in the United Kingdom.

“I’m drawn to the U.K. not only because of the incredible academic opportunities, but also because the U.K. is at the forefront of innovative public policy,” said George. “Being there will allow me to see how I can apply these ideas elsewhere.”

Both George and Hagen are still getting their heads around the honor.

“I was racing out of Lowell dining hall to get to the Loeb Theater and to the last performance of ‘Three Sisters,’ the show I spent the semester directing, when I got the phone call,” recalled Hagen. “My heart was pounding. My legs felt like Jell-O. I couldn’t believe it. I gave the phone to a friend so I would know it was real. I still don’t quite believe it.”

“When it finally hit me what the person on the other end of the line was saying, I was overwhelmed,” said George. “I could kind of feel the course of my life shifting beneath my feet.”