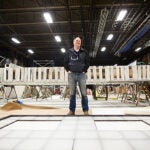 Pulling art from the bin

“I got sick the way Hemingway says you go broke: gradually and then suddenly,” wrote Meghan O’Rourke in “What’s Wrong With Me?,” a 2013 New Yorker article that chronicled her struggles with a mysterious illness.

What was wrong with the accomplished poet and memoirist was an immune system that had gone haywire, attacking the very cells it was supposed to protect. According to the American Autoimmune Related Diseases Association, as many as 50 million Americans suffer from autoimmunity, and the numbers are on the rise.

From the start, O’Rourke’s symptoms varied in type and intensity. “Some very concrete things happened in college,” she said. Later they came and went during her stint as a one of the youngest editors in the history of The New Yorker. Some days she had a sore throat, others days she suffered from vertigo. For a while she felt little shocks all over her body. Worst of all was an overwhelming fatigue. Doctors found nothing wrong. After her mother died in 2008 — an experience she wrote about in “The Long Goodbye” (2012) — O’Rourke contracted mononucleosis and “just never got better.” Two years ago she returned from a trip to Vietnam with a red rash on her arm, a fever, and a rising fear.

“That’s when I got an autoimmune disease diagnosis, because it was pretty clear I couldn’t function. I couldn’t think of words. Something was very wrong.”

O’Rourke, 38, was diagnosed last year with Lyme disease, a bacterial infection caused by a tick bite that can start off feeling like the flu and progress to nerve damage, arthritis, and, in severe cases, neurological problems. “I got much better,” she said. “But either the autoimmunity preceded the Lyme disease, or it helped trigger the autoimmunity.”

Building on the experience, the Manhattan-born author is devoting her time as a Radcliffe Fellow to a new book, “What’s Wrong with Me? The Mysteries of Chronic Illness.” The work, which she hopes to publish in 2017, will be a hybrid: part memoir, part exploration of the myriad factors associated with misunderstood illnesses. Those factors include a health care system poorly equipped for chronic care, said O’Rourke, and the “cultural anxiety” associated with chronic illness, including fears that such conditions are linked to man-made causes — chemical pollutants, a contaminated food system, a hyper-hygienic environment.

“It’s not a medical book, but it is trying to bring together a literary and cultural story of disease and how we think about disease and the experience of disease with some portrait of the contemporary medical culture; hopefully, it will tease out some of the particular conundrums and complexities that both patients and doctors, and all of us, face.”

Like her diagnosis, O’Rourke’s decision to write in detail about chronic illness took time. “If you are sort of going in and out of health, to choose to spend time thinking about illness is a complicated thing, so I ‘hastened slowly,’ as my mother liked to say.”

Two fellowships for the idea — Radcliffe and Guggenheim — helped to convince her she should move forward. “I thought, ‘This is the universe saying there’s interest in this book.’”

At Harvard, O’Rourke has tapped a rich network of resources and researchers. One Radcliffe Fellow studying genetics and biology connected her to an immunologist at the Massachusetts Institute of Technology, and she plans to sit down soon with Harvard immunologists “doing groundbreaking work.” Radcliffe student research partners have helped her interview patients suffering with chronic illness. She has attended Harvard-sponsored medical and public health conferences, and connected with Charles Rosenberg, a scholar of the history of medicine and science and Harvard’s Ernest E. Monrad Research Professor of the Social Sciences, whose work, she said, “is very relevant to what I am trying to figure out about how we got to this place where autoimmune disease is so hard for doctors to conceptualize.”

Other contacts have included economist David Cutler, who specializes in health care, and a trio of professors from Harvard Medical School: Atul Gawande, Jerome Groopman, and Arthur Kleinman. (Gawande and Groopman are former colleagues from O’Rourke’s time at The New Yorker.)

“The interdisciplinary aspect of Radcliffe has been transformative for this project,” she said. “It’s definitely going to be a better book for having that. I feel like I could be here three years and not exhaust the number of people I want to talk to.”

Today, O’Rourke is living with three autoimmune conditions, including thyroiditis, in which the body attacks the thyroid’s glands and the hormones they produce. She has good days and bad. For the past month she has woken every morning feeling like she has the flu. But she’s determined to push through.

“If I only worked when I was feeling good, it would be such a small amount of time. The main difference is that a year ago, my mind felt fuzzy all the time and it was very hard to write. It was sort of like being an impostor of yourself. I would sort of fake it till I made it. Now I am genuinely interested and engaged. My mind is fine. I just don’t always feel that great physically.”