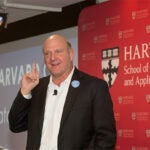 It’s considered a serious threat to the future, and it’s what Harvard Divinity School (HDS) Dean David N. Hempton called one of the key topics of our time.

Climate change and its impact are why HDS holds among its values a commitment to sustainability and being a good steward of the environment everyone shares. It’s why HDS is working and succeeding on its part of the University’s goal to cut greenhouse-gas emissions. It’s also why the School hosted scores of people at a conference organized by HDS staff to examine how religion can respond to climate change.

Through tangible efforts, HDS reduced its emissions by 32 percent from fiscal year 2006 to fiscal 2014, according to data from the Office for Sustainability. The School also decreased its energy use nearly 9 percent over the same period.

But at HDS, the effort to help the Earth goes beyond numbers. On Nov. 7, the daylong conference “Spiritual and Sustainable: Religion Responds to Climate Change” on the HDS campus brought together activists and leaders from various faiths to discuss ways in which religions can talk and take action on environmental issues.

Addressing the attendees gathered in the Braun Room of Andover Hall for a sustainably sourced lunch, Hempton said the forum touched on many of the values held by the HDS community, “especially our commitment to the work of sustainability and good environmental stewardship.”

“We’ve kind of practiced this on our campus for a long time now, in the way we design, heat, and cool our facilities, the way we produce our food, recycle our waste, and all the other ways we try to lower our impact on the environment. We’re proud to have been leaders of this work at Harvard,” he said.

The Rev. Jim Antal, president of the Massachusetts Conference of the United Church of Christ (UCC), discussed the preacher’s role as a leader not just of his or her congregation, but in efforts to heal the environment. He said he believes that faith leadership should be edgy and risky, and that he urges his pastors to occasionally preach a “pack your bags” sermon, one that could push the congregation’s thinking enough that they might seek the preacher’s removal.

“Every time I meet with any group of our UCC pastors, I tell them that they should be at least touching upon climate change every third or fourth sermon, and they look at me like I have forgotten everything I ever learned in seminary,” said Antal. “Let’s use the bell in the church steeple for its original purpose, to sound the alarm and rally the town. It’s time for the sleeping giant of the church, the synagogue, the mosque, and the temple to awaken to the challenge or our age.”

The Rev. Margaret Bullitt-Jonas, who serves in the Episcopal Diocese of Western Massachusetts, offered a framework for climate activists to respond wisely and creatively to the challenge.

“All the world’s religious practices, from mindfulness meditation to practicing gratitude, are disciplines we’ve been given to help our hearts awaken,” she said. “Experiencing and claiming our God-given preciousness is a powerful antidote to the messages we hear that human beings are a cancer on the planet, a virus taking down life.”

The conference was the most recent example of HDS’ ongoing effort to help the environment. This fall, more than 70 solar panels were installed on the roof of the Center for the Study of World Religions, the first renewable energy installation on the divinity campus. In 2008, HDS received LEED Gold certification after renovating Rockefeller Hall. Every day, HDS makes an effort to capture waste for recycling.

Part of the reason HDS is able to implement changes successfully and reduce its energy use is the support from administrators, students, and staff who recognize the effort as a moral calling, said Leslie MacPherson Artinian, an organizer of the conference and leader of the HDS green team. HDS’ director of operations, Ralph DeFlorio, who also helped organize the conference, sees it as a beginning.

“This conference is a first step in bringing people together from many different traditions to talk about an issue we all have in common: climate change,” he said.