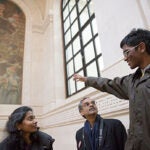 Parents make a weekend of it

Lasting lessons in trust and culture from trip to Moscow

After climbing a wooden spiral staircase I reach a hatch. “Is this it?” “Yep,” answers my friend. “OK. Here we go.”

I thrust open the hatch and ascend into the crisp morning air in Moscow’s Red Square. I am in the bell tower of the Kazan Cathedral with three other Harvard students, looking down at hundreds of people. This is the first morning of a two-week, Harvard-sponsored cultural-exchange visit to Moscow and St. Petersburg. The commotion of everyday life is apparent, yet I am nestled in a cocoon of sacred religious ritual. We make room for Father Roman, our host and the head bell-ringer at the Danilov Monastery, to pass through. He walks up to the “crow’s nest” of the bell tower, where the ropes are. With the sun streaming over his shoulder, Father Roman dives into a ringing that redefines the morning for me. He works with the rhythmic patterning of the bells to create rapturous sonic worlds. His wrists move in swift synchrony as he pulls the ropes both for the people of Moscow and for God. He performs effortlessly, alert to the emotional and spiritual tenors of his creation. Having compressed what felt like three hours into three minutes, Father Roman concludes his ringing.

I never could have anticipated what came next. He gracefully descended from the crow’s nest and faced me. “Your turn.”

The trust ran deep. We went to Russia two weeks after President Obama had canceled a meeting with Vladimir Putin. We went to Russia when gay people were being killed on the streets. We weren’t really “supposed” to be there. We did not travel to Russia for a global leadership conference or anthropological case study. We traveled to Russia because that is where the bells that Harvard helped save came from. People actually care about these bells. My friends and I are among the many who love them dearly. By joining the Lowell House Society of Russian Bell Ringers, we inducted ourselves into perhaps the most epic humanities drama there is at Harvard.

Here in Cambridge, a little over a year later, I continue to experience this trust. This fall I am embarking on an outreach project on behalf of Quad Sound Studios, a student-run recording studio I helped rebuild during my freshman year. The project involves reaching out to and working with talented subway musicians who cannot afford professional-quality recording services. My goal is to integrate their talents with the talents of our student engineers so their art can be shared with the world. Through trust, I hope to form meaningful connections that wouldn’t otherwise be formed.

The power of culture is so real that it has the potential to jolt you out of your body. But don’t worry; I haven’t fallen out of the nest yet. I know one thing for sure: The feeling of a giant resonating bell is its own form of veritas.

Dylan Perese ’16 is a junior at Harvard College.