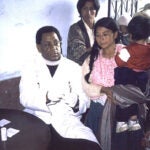 Though it’s often portrayed as a process that takes place over thousands of years, under the right circumstances the evolution of enhanced traits in a species can occur with surprising speed. Exhibit A involves green anoles.

The only anole species native to the United States, these small lizards are typically found on or near the base of trees, where they feed largely on insects. When brown anoles were introduced to this country in the 1950s, these highly invasive lizards quickly began to crowd out the native species, and drove green anoles off the forest floor to higher perches.

Forced to move toward the treetops, a Harvard study found, over just 20 generations in 15 years the green anoles evolved larger toe pads equipped with more sticky scales to allow for better climbing. The study is described in an Oct. 24 paper in the journal Science.

“Over the past several decades, evolutionary biologists and ecologists have come to realize that if natural selection is strong enough, species will evolve, and they will evolve over a timeframe that we can observe,” said Yoel Stuart, a former graduate student in the Department of Organismic and Evolutionary Biology and lead author of the paper, who conducted the research in the lab of Jonathan Losos, the Monique and Philip Lehner Professor for the Study of Latin America. “In this case, we see green anoles moving higher in the trees to avoid competition, and adaptively evolving larger toe pads.”

That rapid evolution, Stuart said, is a textbook example of “character displacement,” an important evolutionary process that allows two closely related species to diverge and take advantage of separate niches.

“Character displacement happens when two species are interacting negatively, and the most common way we think about that negative interaction is that they’re competing for something like food or space,” Stuart explained. “The expectation is that the species would diverge, both in the resources they use and in the aspects of their anatomy that are related to how they use that resource.”

While character displacement remains a core principle in ecology and evolution, concrete examples of the process in nature are surprisingly few and far between. The search for examples led Stuart and colleagues to a series of small, acre-sized islands in Florida’s Intracoastal Waterway, just yards from the mainland.

Beginning in the early 1990s, Todd Campbell, an associate professor at the University of Tampa and one of the co-authors of the new study, transplanted a small population of brown anoles from the mainland, where the lizards were already plentiful, to several of the islands to gauge the native lizards’ reaction to the invaders.

“One reason we were excited about this study is we felt we could catch this character-displacement process in action,” Stuart said. “We knew the native species was on these islands, and we knew the invaders had arrived on some islands, but not all of them, so we had a nice experimental setup where we could observe what occurred as the two species interact.”

Though they found that the competition drove the evolution in green anoles, the result has implications that stretch into a host of other areas.

“This type of rapid evolution is certainly relevant for disease and public-health questions, and it’s relevant to how we expect species to respond to human-caused habitat fragmentation, how they respond to climate change, and how we would expect species to evolve in response to invasions that threaten native biodiversity,” Stuart said. “From a purely academic perspective, I think this is also a great example of character displacement, one of the core ideas of how evolution and diversity proceed.”