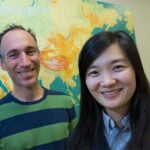 It’s already transformed the way we communicate and consume information, and how we buy everything from hangers to homes. Now Harvard scientists hope to use the Internet to change how social scientists investigate human behavior.

Launched this year by Assistant Professor of Government Ryan Enos, the Digital Lab for the Social Sciences (DLABSS) is designed to serve as an online clearinghouse where social scientists can find study participants.

“What we want to do is combine the advantages of a traditional brick-and-mortar, in-person lab with the advantages of an online lab,” Enos said. “The goal of DLABSS is to create a single online lab any Harvard social scientist can use, where they can run studies, and we will do the work of attracting subjects for them.”

While in-person studies have long been the gold standard in social science, they aren’t without faults. Recruiting large study pools is expensive and time-consuming, and participants are usually drawn from limited geographic regions.

The expectation, Enos said, is that by moving such studies online, scientists will be able to quickly and cheaply tap a worldwide pool of potential subjects.

“What we have realized in recent years is we don’t have to do all this research face-to-face,” Enos said. “There are many research projects today that use samples that are from the online world. For example, a huge portion of the survey research you see today comes from Internet surveys.”

The idea of conducting studies online isn’t new — services that pay users to perform simple tasks, such as Amazon Mechanical Turk, have found increasing popularity among researchers in recent years. But DLABSS is unique because it has been designed from the ground up for research, Enos said.

“As you can imagine, when you’re paying someone to take part in a study, there’s a large incentive for them to cheat — they may claim to be someone they’re not — and that’s especially true when you can’t verify their identity because you’re not face-to-face. For example, many researchers want to conduct studies only on people from the United States. Even though Mechanical Turk tries very hard to verify the identity of the people using the site, there are lots of ways to get around that.

“A common practice in these studies is to pay participants minimum wage,” Enos continued. “That may not be much money in the U.S., but in the developing world, it can be very worthwhile to cheat to receive those payments. There is also evidence that some users of Mechanical Turk are what we refer to as professional research subjects. In other words they’re sitting in front of a computer all day taking studies.”

To avoid those pitfalls, Enos worked with staff at the Harvard Institute for Qualitative Social Science (IQSS) to create a lab that relies on volunteers.

“There are actually a number of examples of volunteer science that have been conducted in recent years, including here at Harvard,” he said. “We think some people will come to the site because they’re just good citizens, or they’re interested in taking part in the creation of knowledge, but we think there may also be some people who just find these things interesting or entertaining.”

Interested users provide some initial demographic information, such as age, gender, race, income level, and political preference, and can then take part in any of the studies posted online.

As the subject pool grows, scientists may be able to directly contact users who meet certain demographic criteria. For example, a researcher hoping to study Latino men between the ages of 20 and 40 could use the site to contact only users who fit that description.

For now, DLABSS will be open only to Harvard researchers. Enos said that he hopes researchers will be willing to accept slower progress in finding subjects while the lab builds its study pool.

“You can imagine that online studies could be part of a larger research agenda,” Enos said. “Researchers or students can come to DLABSS to conduct an initial study that captures a specific population, then move on to other studies or observations in the day-to-day world, because they offer advantages over the Internet.”