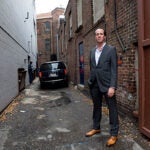 Faculty to increase 50 percent with support from Ballmer

Former Microsoft CEO Steve Ballmer made the case today that advances in computer science will be a key driver of global innovation, and that an enhanced computer science program will ensure that Harvard plays a leadership role in a host of other fields.

Ballmer was joined by President Drew Faust and School of Engineering and Applied Sciences (SEAS) Dean Cherry Murray at an i-lab event to formally announce that the University will increase its computer science faculty by 50 percent over the next few years, to 36 from 24.

The expansion will be achieved with financial backing from Ballmer, who graduated from Harvard College in 1977 and dropped out of Stanford Business School to join classmate Bill Gates during Microsoft’s early years.

“In my opinion, leadership in computer science is fundamental to Harvard remaining the leading institution in education,” Ballmer said. “It really is about ensuring this institution stay vibrant, because … if Harvard doesn’t lead [in computer science], it will affect all parts of the institution. If Harvard doesn’t lead, it affects the vibrant ecosystem of companies and entrepreneurship and job opportunities that create this amazing feedback cycle: kids graduate, start companies, companies grow, they give back to the institution. The academics benefit from the entrepreneurship; the entrepreneurs benefit from the academic research and talent that’s been educated [there].”

In addition, the School has nearly 100 doctoral students in computer science and 38 students in its new one- and two-year master’s programs in the field. The School also has two computer-science related research programs: the Center for Research on Computation and Society and the Institute for Applied Computational Science.

A day earlier, Ballmer had visited the introductory course CS50, which, with 875 students, has become the University’s most popular. He reflected on lessons learned at Harvard and Microsoft, and as the owner of the Los Angeles Clippers.

Big ideas, hard work, passion, optimism, and good luck have all played a part in his success, Ballmer told the students on Wednesday. He also relayed his belief that “everything is a technology problem,” and that technology, ultimately, drives progress.

The support from Ballmer — the amount hasn’t been announced — comes as part of the $6.5 billion Harvard Campaign, whose public phase kicked off last fall. The initiative has so far raised $4.3 billion.

“He’s enabling for us a significant expansion of computer science at a pivotal moment for the field and for scientific discovery across fields. He has challenged us to catch the next wave, the next wave in computer science, and he has pressed us to be ready for that challenge and to rise to it. We can and we will.”

The increase in computer science faculty is part of a broader growth plan at SEAS, which includes an eventual move to new facilities in Allston. The School traces its roots to 1847, when the Lawrence Scientific School was established at Harvard. The Lawrence was dissolved in 1906, but engineering continued under various organizational guises until 2007, when the School of Engineering and Applied Sciences was established from what was then the Division of Engineering and Applied Sciences.

A milestone in computing history was recorded at Harvard in 1944, when Howard Aiken unveiled the Mark I, the world’s first programmable computer, a portion of which is on view at the Science Center. Major contributions in the field have been made by Harvard students, include the development of Microsoft by Bill Gates and his high school friend Paul Allen in 1975, and the founding of social media giant Facebook in 2004 by Mark Zuckerberg. Faculty members are working today in areas such as complexity theory, machine learning, and artificial intelligence.

“Harvard has led some of the most important discoveries in the history of computer science and has taught some of the industry’s biggest game-changers, Steve among them,” Faust said.

Murray said that when she was a student, physics was the fundamental discipline that underlay other scientific fields. That is no longer the case, she said.

“Today it is computer science. Computer science drives new knowledge and discovery in nearly every domain, including science social science and humanities. Computer scientists at Harvard are collaborating with colleagues in ever imaginable discipline.”

Keno Fischer ’16, a physics concentrator who attended today’s event, called the announcement “extremely exciting.” Fischer said he’s taken a number of computer science courses and is working with friends at MIT on a new programming language for scientific computing.

Marc Papazian ’17, an economics concentrator and CS50 student, echoed Ballmer’s assertion that computer science is an important skill across a range of fields.

“I think it’s great. CS is really a skill needed in any field in the future. I think it’s really important. [Computer science] is ever expanding and ever changing.”