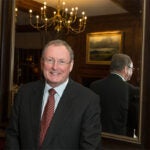 The mission of art museums

In February of 1968, film actress and theater icon Angela Lansbury made her first visit to Harvard. “I’m so charmed,” she said, accepting the Hasty Pudding’s Woman of the Year award, “I’m absolutely spitless.”

Recalling that visit during a recent phone interview, she quipped, “I always had a warm feeling for Harvard, and the young men.” Lansbury was 42 then, and starring in “Mame,” which wrapped up its Broadway run in 1970 after four years, 1,508 performances, and a first Tony Award for its leading lady. (She has five now.)

Now 89, she returned to Harvard Friday to visit the Harvard Film Archive (HFA), which is hosting a retrospective of her films. The three-time Oscar nominee and six-time Golden Globe winner introduced a screening of “All Fall Down,” the 1962 John Frankenheimer masterpiece that she said is too little seen these days.

Lansbury was also here to see an old friend, John M. Hallowell ’63, a celebrity journalist and Life magazine writer who penned a 1966 cover story on her role and her dash to win it, a piece called “A Smashing New Dame to Play Mame.” From that time on, they corresponded. (Their letters are now archived at Boston University.)

Hallowell went on to write about entertainment figures for The New York Times and The Los Angeles Times and to author five books offering peeks at fame and its darker side. He recalled that as a young man, “I was always in a hurry to get things done.”

Lansbury credited Steven Brown ’99, a 17-year manager at the HFA box office, as her co-conspirator in arranging her appearance. “A bright cord of love seemed to connect all the dots,” he said of the evening. “People and places coalesced so tenderly for the occasion: John’s love for Angela, and her abiding and loyal appreciation of his expression of ardor.”

That bright cord enwrapped him too, said Brown, a long-term supervisor at the First Church Shelter in Cambridge. For the past six years he has been a regular visitor to the Cambridge nursing home where Hallowell now lives.

For the screening at the Carpenter Center for the Visual Arts, Hallowell took a seat near the front. He had met Lansbury for the first time in 1966. Magazine magnate Henry Luce — “my big boss,” said Hallowell — had suggested the profile, and “put Angela on the cover.”

“She’s a lovely woman,” said Hallowell of his friend, whom he had last seen four years ago, but “she doesn’t take fools easily. She’s like Streisand … When she’s happy, her favorite expression is ‘Heaven.’” And when she’s not? Hallowell just raised his eyebrows.

In “All Fall Down,” Lansbury played housewife Annabell Willart. She was the adoring mother to rakish Berry-Berry (Warren Beatty), the distracted one to daydreaming Clinton (Brandon DeWilde), and the unhappy, hectoring wife of husband Ralph (Karl Malden), a real estate agent whose escape was jigsaw puzzles and bourbon.

Lansbury was 36 when shooting began, but she played the wife of Malden — 13 years her senior — and the mother of Beatty, who was born when she was 11. “I never acted my age,” said Lansbury on the phone of what became a leitmotif in her casting for Hollywood roles. “I was always able to give the impression of being older than I was, which was very useful.”

“All Fall Down,” she said, catapulted her into a role in another 1962 Frankenheimer film, “The Manchurian Candidate.” (Lansbury asked that the HFA not screen it for her visit. “I think it’s been over-shown,” she said.) She played another troubled mother, this time to actor Lawrence Harvey, though he was only three years younger.

As “All Fall Down” was wrapping up, Frankenheimer “made up his mind there and then that I was going to play the mother in ‘The Manchurian Candidate,’” she said. He gave her a copy of the Richard Condon novel of the same name and said, “This is what I want you to think of as your next role.” Lansbury stayed up until 4 the next morning finishing the book. “My God, I thought,” Lansbury said of her reaction to Mrs. Iselin, the character she was to play. “This is the most evil woman I’ve run into in a long time. It would be rather fun to assay this one. So I went into it hook, line, and sinker.”

She enjoyed the experience. “The film was so successful. It was so original and innovative in every possible way, and is to this day,” said Lansbury. “I don’t think there’ll ever be a movie quite like it, in what it asks the audience to believe and accept.”

“Manchurian” also led to a lifetime friendship with co-star Frank Sinatra, despite their sharing just one scene, in a coatroom. “He never looked at me, and I never looked at him,” she recalled. “He was a congenial man,” said Lansbury. “I got to know him afterwards. And he was a huge fan of ‘Murder, She Wrote,’ he and everyone under the sun.” Her iconic turn in television was on the air from 1984 to 1996.

“The Manchurian Candidate” was Lansbury’s last big film role of that era. Afterward, she was ready to spend most of her time on the stage. “I think I was rescued at that point,” she said. “If I’d gone on playing matronly older women, it would have been very hard for me to disassociate myself from those parts.”

Earlier, under contract with MGM, “I was hating it,” said Lansbury, “hating the things I was doing,” until she made the independent films with Frankenheimer.

After 1962, Lansbury was a belle saved by a whistle, in a way. She received a letter from playwright Arthur Laurents, then writing a musical with Stephen Sondheim, “Anyone Can Whistle.” Would she care to try out for a singing role? “They knew I could carry a tune,” said Lansbury.

In 1957, Lansbury played her first professional stage role opposite Bert Lahr in “Hotel Paradiso.” In 1960, she performed in “A Taste of Honey” with Joan Plowright. “I had slipped back to New York from Hollywood and done a couple of plays,” said Lansbury, “and that whet my appetite to do more theater. I’d trained to go into the theater, but I’d never exercised that. I had been sidetracked to movies.”

The experience of “Anyone Can Whistle” in 1964 came with a few rough patches, and the show closed after just nine days. But Lansbury was hooked. Broadway beckoned and soon she landed her role in “Mame,” which opened on Broadway in the summer of 1966.

She worked again with Sondheim in 1979 in a show with a decidedly different outcome: the groundbreaking, enormously successful “Sweeney Todd: The Demon Barber of Fleet Street,” in which she debuted the role of Mrs. Lovett and won a Tony.

By Monday, the busy Lansbury was scheduled to be back in Los Angeles to begin rehearsing for Noel Coward’s “Blithe Spirit.” In 2009, she helped revive the play in a Broadway run that earned her that fifth Tony. This time, a North American tour begins in December and ends in March.

During a question-and-answer session after the screening, Lansbury talked about being so vigorous at 89. “I don’t work at it like mad, but I keep moving,” she said. “I’m not good at hanging out.”

But Lansbury was content to hang out at the HFA, for a few words before the film, and many more after the screening. “We’re interested much more in accomplishment than celebrity,” said HFA programmer David Pendleton, introducing her. “But it’s a rare treat to honor somebody who has [both] the renown and the accomplishment.”

Walking out before the lights went down, Lansbury struck another kind of Hollywood note. “I’ll be back,” she said.

“Angela Lansbury on Screen” concludes at the Harvard Film Archive at 7 p.m. Nov. 23 with a screening of “The Private Affairs of Bel Ami” (1947), directed by Albert Lewin. For details, visit the HFA site.