It’s moot, but it matters 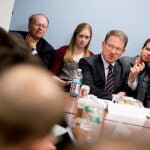 A price too high

“It was fully as good as one would expect at Harvard Law School,” a pleased Scalia said during his final comments.

During the arguments, Scalia flashed his famed wit, drawing laughter as he questioned teams of students arguing the merits of letting a career criminal appeal his conviction on a drug charge.

The justices directed blunt questions toward the two teams, but the students stood their ground in defense of their arguments, which impressed the judges. “This is as good an argument as you are likely to hear in a court of appeals, and probably in my court,” Scalia said after deliberations.

The judges didn’t render a decision, but named Kevin Neylan the best oralist, awarded the petitioning team the best-brief award, and named the respondents the best overall team.

The petitioner’s team was made up of Jennifer Garnett, Jordan Moran, Ivan Panchenko, and Tom Ryan, along with oralists Ezra Marcus and Katie McCarthy.

The respondent’s team was made up of Jay Cohen, Cody Gray, Spencer Haught, and Christina Martinez, along with oralists Sean Mirski and Neylan.

Each oralist faced the panel of judges for 16 minutes, followed by a three-minute rebuttal by Marcus.

Scalia’s moot court heard a request for an appeal in the case of a “defendant” who was convicted of possession of crack cocaine with intent to distribute, after a plea deal in which the charge of possessing a firearm in connection with drug trafficking was dropped with the stipulation he wouldn’t appeal his sentence.

The trial judge had followed guidelines for career criminals and imposed a stiffer sentence on the defendant who had two prior felony controlled-substance convictions.

After his conviction, the defendant demanded his attorney appeal the conviction, claiming the trial judge erroneously ruled the defendant played more than a minor role in the crime. The attorney refused because the defendant waived the right to appeal and appealing would break the plea deal, which would open him to an even harsher sentence.

There were curves thrown at the students. Shortly after the conviction, the circuit court in which the district court resided revised its own rules for considering what makes a career criminal, which would have changed the defendant’s status. The petitioning team argued the defendant had received inadequate legal counsel when the defense attorney refused to file a notice of plans to appeal, and it challenged the sentencing based on the change in law. The responding team defended the sentencing based on the plea agreement and interpretation of the law at the time of the trial.

Relief from the tension seemed to explode through the courtroom when the justices left to deliberate. The teams hugged, shook hands, and slapped each other on the backs as the capacity crowd gave them a boisterous, prolonged standing ovation.

“I think that for most of us, it was the defining experience of law school, and the experience of working with a team is what makes it worthwhile,” Marcus said. “That’s the real world in practicing law.”

It was a difficult case to argue, but the students rose to the occasion, Jordan said. He had questioned students at length on their arguments and reasoning, challenging their memory of case law during their briefs, and then called it an honor to sit on the bench during presentations.

“You guys did a good job finding where the gaps were, where the problems were,” Jordan said.

Millett was effusive in her praise of the students. The teams were engaged in their work and used case law as well as it could be done, she said. “These were two spectacular sets of briefs; I wish I got briefs like this every day,” Millett said. “These were four spectacular oral arguments.”

It’s important for attorneys to establish a rapport with the bench when arguing a case, but some attorneys think questions from judges are an interference as they regurgitate their briefs, Scalia said. “Good advice for counsel is [to] welcome questions,” he said.

The moot court has been held since 1911. The competition starts with a qualifying round for second-year students who develop briefs on hypothetical cases that are presented in moot courts with fellow students, teachers, and attorneys acting as judges. The final four teams then argue another case with real judges before the last two teams move to the Ames Court.