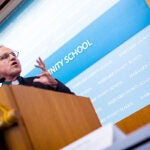 Scholars journey to Radcliffe to examine science of navigation

John Huth was out kayaking one autumn day in 2003 when a fog rolled in. Without a compass and unable to see the shore, Huth used the direction of the wind to guide himself to safety.

The next day, the harbormaster told Huth that two young women had been kayaking at the same time, but had not returned to land. The body of one was recovered the next day. The second woman was never found.

The incident hit Huth hard, and got him thinking about navigation in the age of the personal device. Huth, the Donner Professor of Science and co-director of the Radcliffe Institute for Advanced Study’s Science Program in Academic Ventures, began to pay greater attention to natural cues, such as the position of the sun and the stars.

He learned enough to begin a course in primitive navigation, and to write a book, “The Lost Art of Finding Our Way” (2013). He also discovered a community of scientists investigating the subject. On Friday, leaders in the field of navigation converged on Radcliffe’s annual science symposium to discuss findings in everything from brain science to animal navigation to the psychology of how a lost person behaves — which can give rescuers important cues about where to look.

Radcliffe Dean Lizabeth Cohen, the Howard Mumford Jones Professor of American Studies, welcomed a group of several hundred — hikers as well as scholars — to the Knafel Center for the daylong event, “Lost & Found: A Science Symposium about Navigation.”

Navigation, Cohen said, is a busy field despite not fitting neatly into a particular discipline. Speakers addressed the uncanny skills of London taxi drivers, the extraordinary long-distance flights of albatrosses and swifts (even those newly born), and the journeys of the ancients.

Since the 1970s, speakers said, researchers have discovered several types of cells that help mammals orient themselves. Three scientists exploring human navigation were rewarded for their efforts earlier this year, when the 2014 Nobel Prize in physiology or medicine recognized their discovery of specialized cells that “constitute a positioning system in the brain.”

Huth said he has come to understand how much science can be taught through the study of navigation, as well how sophisticated primitive peoples were in their understanding of the world around them.

Eleanor Maguire, a professor of cognitive neuroscience at University College London, talked about experiments in which she applied functional magnetic resonance imaging to London cabbies. Using a video game set in the London streets, she had the drivers play a modified version while in the scanner. The researchers debriefed the drivers afterward, finding “a staggering amount of thinking going on during navigation.”

Much of the activity, she said, happens in the hippocampus, a pair of seahorse-shaped regions deep inside the brain. London cabbies, who have to memorize and navigate 25,000 streets, have an overdeveloped posterior hippocampus, which comes at the expense of some memory, Maguire said.

She also investigated a little-studied brain region called the retrosplenial cortex, tracking landmark recognition. Her work showed that the ability to recognize permanent landmarks varies by individual and is strongly related to navigation skills.

Susanne Åkesson, a professor and principal investigator of the Centre for Animal Movement Research at Lund University in Sweden, outlined several ways that animals perform astounding feats of navigation. Scientists studying creatures as diverse as birds, sea turtles, and insects have found that they navigate by the sun and stars, as well as patterns of polarized light, the Earth’s magnetic field, and even, in the case of young sea turtles, by reflected moonlight and the direction of waves hitting shore.

Åkesson conducted experiments in which animals were captured, transported to another location, equipped with a satellite tracker, and then released. She used that technique to shed light on a particular migration that has puzzled herpetologists for decades — that of sea turtles from feeding grounds off the Brazilian coast to nesting beaches on tiny Ascension Island, some 1,400 miles away. The turtles, she found, employ a search strategy, swimming in large loops until they detect a downwind signal — possibly smell — to swim directly toward.

Åkesson has also studied one of the world’s champion fliers, the wandering albatross, whose wingspan — the planet’s largest — serves to keep the birds mostly airborne. Åkesson’s research crew studied juveniles on the Crozet Islands in the southern Indian Ocean. Initial flights, she said, are driven by instinct, but eventually the birds rely on experience as well.

“The question is, how do they know where to go, and what information do they use?” she said.