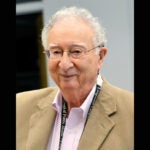 Jorge Domínguez will step down from his role as vice provost for international affairs at the end of his appointment term in June to return to the faculty and to his lifelong focus on teaching and research.

During his nine years and two terms as vice provost, Domínguez has played a key role in the expansion of the University’s academic activities around the world. He has cultivated and established new professorships in Islamic and Southeast Asian studies, and forged agreements with individuals and governments worldwide to provide fellowship funds for students, postdocs, and visiting professors to come to Harvard from countries as diverse as Brazil, Egypt, Mexico, and Taiwan. He has led negotiations with donors to magnify the academic impact of their existing gifts, freeing up funds for work including faculty and student study of Australia and conferences and publications on Islamic art and architecture. Domínguez also launched and oversaw the first Harvard-wide visiting committee focusing on international and area studies across the University.

“Over the past decade Harvard has become a truly international institution, with teaching and learning activities happening across the globe,” President Drew Faust said. “The fact that more students and faculty than ever are conducting work abroad is due in no small part to Jorge’s extraordinary work in expanding Harvard’s global presence.”

As founding chair of the University Committee on International Projects and Sites (UCIPS), a University-wide faculty committee that advises the provost on Harvard’s global engagement, Domínguez oversaw the launch of new Harvard offices in China, Mexico, and Turkey, as well as new offices for the Harvard Business School Press in Asia, Europe, and the Middle East.

“Jorge has led the development of a strong, nimble organization that facilitates Harvard’s international activity,” Provost Alan M. Garber said. “His efforts have expanded Harvard’s international work and have made it easier and safer to work and study abroad. I’m deeply grateful for his leadership in advancing the University’s role in the world.”

After his appointment ends on June 30, Domínguez will remain the Antonio Madero Professor for the Study of Mexico in the Government Department. He will also continue his work as chairman of the Harvard Academy for International and Area Studies.

“I have greatly enjoyed the past several years in the provost’s office,” Domínguez said. “But I am a scholar at heart, and look forward to returning to research and teaching full time.”

A search committee for Domínguez’s successor will be appointed in the coming weeks.