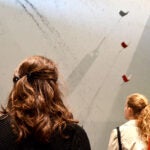 “The Norton Anthology,” that classic college volume that students have long lugged to and fro in all its backbreaking weight, has expanded its oeuvre.

“The Norton Anthology of World Religions,” spanning more than 4,000 pages, is out this month from W.W. Norton & Co., and with a major Harvard connection. Editor Jack Miles tapped James Robson, professor of East Asian languages and civilizations, to edit the Daoism volume of the anthology, which also features volumes on Hinduism, Buddhism, Judaism, Christianity, and Islam.

Robson began studying Daoism in the 1980s. The texts of the ancient Chinese religion, and its most influential text, the “Daode Jing,” said Robson, “have seduced readers, both then and now, with romantic notions of the power of passivity, the mastery of skills through effortless action. And they entertained with their stories of immortals with square pupils who breathe through their heels, gather mystical mushrooms, and can enter water without getting wet, or enter fire without getting burned.”

Over time in the West, Daoism inspired Jean-Jacques Rousseau and Immanuel Kant, Henry David Thoreau and Ralph Waldo Emerson, Oscar Wilde and Alfred, Lord Tennyson, and even, said Robson, Ronald Reagan: “As president, Reagan began his final State of the Union address by weaving in a passage from chapter 60 of ‘The Scripture of the Way and Its Virtue’: ‘History records the power of the ideas that brought us here those seven years ago — ideas like the individual’s right to reach as far and as high as his or her talents will permit; the free market as an engine of economic progress. And as an ancient Chinese philosopher, Lao-tzu, said: “Govern a great nation as you would cook a small fish; do not overdo it.”’”

Daoism’s influence on 20th-century thinkers was tenuous for a while. The religion was on the verge of extinction following the Cultural Revolution in China, said Robson.

“I took up this project in order to honor a very small but extremely dedicated group of scholars and translators who have brought this religious tradition back into the light. And I tried to include material from the earliest texts that allow us to say something about Daoism all the way up to the present spread of Daoism to unlikely places,” he said.

“I included RZA, of the Wu-Tang Clan, and George Harrison, since they are fine examples of the ways that ideas about Daoism spread around the world from the 17th century to the present day,” he said. “RZA was turned on to Daoism by reading the ‘Daode Jing,’ and the name Wu-Tang Clan itself is also derived from the name of one of Daoism’s sacred mountains, namely Mt. Wudang. The Beatles song ‘The Inner Light’ was Harrison’s attempt to put Chapter 47 of the ‘Daode Jing’ to music.”

James Robson and Jack Miles will give a talk tonight at the Harvard Book Store, followed by a screening of “Couching Tiger, Hidden Dragon” at the Brattle Theatre. Find more information here.