The Game kicks off with high spirits 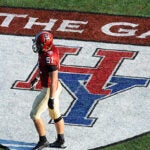 Ready for The Game

With just 0:55 remaining in Saturday’s game, Harvard beat Yale, 31-24 at Harvard Stadium, securing an undefeated season for the Crimson and outright ownership of the Ivy League championship title for the eighth straight year. For postgame coverage, visit Harvard Athletics website.

The spirit of the day was already a winner

The mood was festive on Saturday as undefeated Harvard, bidding for the sole possession of the Ivy League crown, met once-beaten Yale in the 131st edition of The Game.

Festive throngs in crimson hats and scarves poured out of the Harvard Square T station and wound their way through the Square, across the bridge to Harvard Stadium. Scalpers fanned out along the route, asking: “Any tickets to sell?” One aspiring spectator wearing a full Santa Claus suit carried a sign: “Santa Needs a Ticket.”

Homemade signs — the more creative the better — were the order of the day on the Dillon Field House quad where ESPN hosted a live broadcast of College Game Day under the looming horseshoe of Harvard Stadium. The crowd roared whenever the show went live, and a camera zoomed overhead on cables to capture the revelry.

Among the homemade placards waved for the cameras: “My Mom Thinks I’m Enrolled Here,” “Abolish the Forward Pass,” and in a scholarly dig at the Elis, “Yale Cites Wikipedia.”

Scott Hanson, Yale ’85, surveying the scene, said, “This is fantastic. It’s better than anything when I was an undergrad.”

Maggie McNamara ’17, and friends from Providence, R.I., were among the crowd in a small grandstand yelling for the cameras and cheering the Harvard team as it entered the stadium for the game. “Game Day has added to the excitement,” McNamara said, while her friend Emily Fitts, a student at Amherst College, waved a Crimson foam finger. Their friend Addie Bodell, noting she attends Vanderbilt, in the Southeast Conference, said, “This is just as exciting as any SEC game.”

Katy Dolan ’18, a freshman from Spokane, Wash., helped whip up the crowd on behalf of another ESPN sponsor, Coke Zero, which installed the grandstand. “I never expected to see anything like this at Harvard,” she said, gesturing toward the quad filled with revelers.

At the tailgate venue behind Jordan Field, the air was filled with smoke from grilling hamburgers and with seagulls wheeling, Hitchcock-like, in search of picnic leftovers. Tailgaters socialized while eating chowder and chili under banners from Harvard and Yale, their cars and Coleman grills lined up, row after row.

At one gathering, Richard Boardman, former executive director of the Harvard College Fund, sampled what he described, with a smile, as “a Yale Bloody Mary,” so-called because “it has more horseradish than it should. They need that boost.”

Nearby, guests stopped to pat a bulldog in a blue Yale sweater, none other than Handsome Dan, the Elis’ mascot. He was tended by Chris Getman, Yale ’64, who has been the keeper of Handsome Dan for 31 years, this dog being the fourth in the line by that name.

The dog reared and nibbled the chin of a Harvard Gazette writer. “If you come from Harvard he will bite you,” observed Robert Whitby, Yale ’64. Said Getman: “He can smell a Cantab from a mile away.”

It was a tale of two bulldogs, however, on this day in Cambridge. Outside the stadium, another bulldog, this one in a crimson Harvard jersey reading “Future Freshman,” received the attention of admiring passersby. This canine, Quasimodo, was owned by Lauren Barra, Harvard Business School ’18. “He’s been like a mini-celebrity,” she said. “Everyone’s been wanting to take his picture all day.”

Quasimodo, in crimson, waddled his way in the opposite direction across the bridge as fans streamed into the field for the first quarter. Many stopped to pat the incongruous Harvard bulldog, but he wouldn’t be going to the game. “No dogs allowed in the stadium,” Barra said.

In play before The Game

But there was excitement in the air well before Saturday’s kick-off. For many students, alumni, and other fans, The Game began hours, days, or even years earlier.

At Sparks House, the residence of the Memorial Church minister, the Rev. Jonathan Walton hosted 100 guests at his yearly Harvard-Yale barbecue on Friday night, drawing together “the college football team, Atlanta, North Carolina, the Ed School, the Divinity School — a bunch of connections that are meaningful to me,” Walton said.

This year, the gathering united Walton, the Plummer Professor of Christian Morals, Pusey Minister in the Memorial Church, and professor of religion and society at Harvard Divinity School, with the captain of the Harvard football team, and his former elementary school principal, in a story that began 90 years ago.

In 1924, two African-American brothers, Cephas and Walter Washington, veterans of World War I, returned to the segregated South and, in the words of a descendant, “spent every dime they had” to buy more than 40 acres of land in Dudley, N.C. A farm Cephas Washington built there is today a beloved summer retreat for the family of his great-grandson, the Rev. Walton,

“I’m from Atlanta, but every summer I go to North Carolina to read, write, and relax at the farm that has been in my family since the early 20th century,” Walton said. Dudley is a small community, nine miles from Goldsboro, in a region known for its barbecue. “Maybe 20 people live there,” he said, with a laugh. “I take my kids there every summer.”

In recent summers, Norman Hayes ’15 has served as a house sitter at the Memorial Church minister’s residence while the Walton family vacationed in North Carolina. Hayes, the captain of the Harvard football team, is from Atlanta, where Walton’s good friend from childhood, Jason Marshall, HGSE ’99, was his elementary school principal. That’s how the football player and the minister came to meet at Harvard.

“Norman told me he had family in North Carolina, but didn’t have specifics,” Walton recalled. Last year, Walton had the opportunity to meet Hayes’ parents, and the conversation with his mother, Nikki, turned to the Tar Heel State. “She asked where my family was from,” he recalled. “It took us three minutes to track it.”

It turned out Nikki Hayes was the great-granddaughter of the other brother who bought land in Dudley 90 years ago, Walter Washington, brother to Walton’s great-grandfather. “We’re cousins,” Walton said. “Small world!”

Nikki Hayes’ family today owns the property on Highway 117 in Dudley across from the Walton family farm. “She is owner of half the land I so love in North Carolina,” Walton said. “She visited my grandmother’s home during the summers she would come home from the University of North Carolina in Chapel Hill. Yet we never met.

“We are neighbors and cousins, and we all lived within a few miles of each other in Atlanta — yet we had no idea. We come literally from the same land in North Carolina. Yet we had to come to Harvard to realize we were a family,” he said.

Through his role at this church at the crossroads of the University, Walton said, “I have ended up connecting with family, with my own bloodline, right here on campus. That bloodline was babysitting for us!”

So this year’s Harvard-Yale barbecue at Sparks House was a homecoming, not of New England patricians, but of the descendants of a pair of African-American brothers who made good on a dream of owning a farm in North Carolina.

“It says something good about Harvard,” said Walton. “This is Harvard.”

Walton’s was not the only memorable party. If Harvard-Yale is The Game, with no explanation needed, then the annual Cheever-Sperry get-together is The Tailgate.

Invitations are coveted to the pre-game gathering that friends Roger Cheever, Harvard ’67, and Richard Sperry, Yale ’68, have hosted for 42 consecutive years. A drawing card is the “Commencement punch,” made of dark rum, tea, honey, vanilla extract, and cinnamon, following a Cheever family recipe handed down from the Prohibition era. “No one has ever refused a glass,” says Cheever, associate vice president for principal gifts at Harvard.

Cheever and Sperry, a retired Comcast executive, both were at the storied 29-29 game in 1968, but didn’t know each other yet. Their great friendship began when they attended Navy Officer Training together in Newport, R.I., before they each went on to serve on aircraft carriers off Vietnam, Cheever on the USS Coral Sea, Sperry on the USS Ranger. “Did Roger tell you he was on an aircraft carrier in the Gulf of Tonkin and brought it to a screeching halt so he could come over and visit me on my aircraft carrier?” Sperry recalled. “He took a helicopter over for a surprise visit in the middle of the Gulf of Tonkin.”

That convivial spirit endured when, as graduate students in Cambridge, they kicked off their tailgating tradition at The Game in 1972. “We have gone to every single one since,” Cheever said.

Two hours before game time on Saturday, the Cheever-Sperry gathering was in full swing behind Jordan Field and the Beren Tennis Center along the perimeter of Harvard Stadium. Guests gathered under a distinctive H-Y flag, with the H above the Y reflecting last season’s winner. (In years following Yale victories, the letters are reversed.) The composer Tony Schemmer, Yale ’68, HMS ’72, was expected in his raccoon coat. Cheever wore the Harvard letter sweater he won in lightweight crew.

On the menu were grilled steak sandwiches, seasoned with herbes de Provence, “a little accent I picked up from a French fighter pilot,” Sperry said. “We spare no expense. If somebody brings a bottle of wine, we have a label we put on with a glue stick, a picture of Roger and me standing in the Yale Bowl at 8 o’clock one morning. We call it our own Boola Wine.”

The recipe for Commencement punch calls for “five drops of this, a dollop of that, and a splash of this,” said Cheever. “There’s room for creative interpretation.” He said the concoction is particularly good in cold weather, the honey in it making it “very easy on the throat,” and hence good for yelling. “We have lots of reason at Harvard to yell these days, given our wonderful record of victories in recent years,” Cheever observed.

Guests over the years have included the presidents of both Harvard and Yale. Actor Tommy Lee Jones, Harvard ’69, regularly attends when The Game is played in Cambridge. (“He makes a pilgrimage from Texas to be here,” said Cheever.) One year, Jenna and Barbara Bush, twin daughters of then-President George W. Bush, Sperry’s classmate at Yale, attended with their Secret Service retinue. “We had three or four Secret Service guys very unobtrusively off on the sidelines with gizmos in their ears,” Cheever recalled.

What keeps people coming back year after year? “We enjoy each other’s company tremendously,” said Sperry, who is godfather to Cheever’s eldest son, Chris, Harvard ’02, while Roger and Jane Cheever are godparents to Sperry’s daughter Isabel, Yale ’16. “Between Roger and me, there’s a general Harvard-Yale banter that goes back and forth. All of our friends have come to the tailgate party over the years, and they’ve all got to know each other. Harvard people have got to know Yale people, and vice versa. It’s turned into a fun event everyone looks forward to every year. If we didn’t have it, we’d get lots of emails from people: ‘Where are you guys?’”

Said Cheever: “The tailgate is all about family and friends and fun, and I underscore all three of those. Yes, it’s Harvard, yes, it’s Yale. But more importantly, it’s about friendship.”