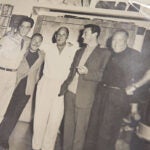 Screen, stage, and television actress Angela Lansbury visited the Harvard Film Archive (HFA) this month for a screening of “All Fall Down,” a vibrantly dark and erotically charged family thriller directed by John Frankenheimer and released in 1962. The picture lost more than a million dollars — real money 50 years ago — and since then has been little seen or appreciated, she said.

But nothing is lost on the 89-year-old actress, who spent 40 minutes on the phone with a Harvard Gazette reporter before her visit and nearly that much time answering questions from the audience after the screening.

With her answers, Lansbury ranged up and down the years, and across all the acting venues she has mastered: cinema (powerful, beginning with “Gaslight” in 1944); stage (triumphant, as in “Mame,” from 1966 to 1970); and television (transcendently calm as amateur detective Jessica Fletcher in “Murder, She Wrote” for 12 seasons).

A few highlights from the phone interview, and from the HFA screening event:

On the first film she ever saw as a child:

“I think it was ‘King Kong,’ would you believe it? I would have been 7. I remember it was at the Regal Theatre [in the village of Berrick Salome, South Oxfordshire, England]. I was terrified.”

On growing up with the movies:

“I used to watch films when I was walking home from school [in London]. For 9 pence you go see the matinee of a film. I remember seeing old-fashioned black-and-white films. Then as I grew up — 10, 11, 12 — my grandmother, God bless her, took me to the big cinemas in downtown London. And I saw — and this really did [have] an effect on me, as I think it did on all young women of my age who loved to dance — Fred Astaire and Ginger Rogers. I grew up with them. And then I saw Bette Davis, and saw great dramatic acting going on. I’m sure a lot of it rubbed off.”

“It was a sort of a dream world I was in, you see. I was so young, and things were just beginning. I was really awed by what I was being asked to do. And when you’re challenged like that, you damn well do your best.”

On life as an MGM contract player, starting in 1943:

“We were cosseted and cosseted and taken care of,” despite contractually required long hours — five and a half days a week, 52 weeks a year. “It was a different world.”

“He was a formidable chap. He ruled the roost. He governed the set. He lived up to all the stories that were told about him. When he entered the set [with an entourage] he had a great idea of himself. He had a man with a chair always at the ready.”

“I loved working with him, and worked with him a great deal. And I was glad that I did because I’d seen him as a child [in “Confessions of a Nazi Spy” (1939)]. He was awfully good in it. … He was enormously bright, and bored to death most of his life. He could never find anybody who was intellectually his speed.”

“Warren Beatty in his very young years … was absolutely the rage of Hollywood. And, boy, was he attractive.”

On her role as Beatty’s fraught, intense mother — though she was only 11 years older:

“At the time, it came as a tremendous boost. I realized I could play older women effectively.”

On Beatty’s method acting, which made everyone “watch him very closely,” said Lansbury:

“He was already a bit of a legend. I always remember, there was one scene in which he was called upon to be out of breath. Well, instead of acting out of breath, he felt it was necessary to run around the set, outside. So that sort of thing, let’s say, it made one stretch one’s eyes.”

On moving from the screen to the stage:

“I always say, after leaving ‘The Manchurian Candidate’ [1962] I left Hollywood. I wanted to get away from Hollywood and playing older women.”

On the difference between acting in movies today and in plays:

“In movies rehearsal is really nil. [In theater] you form a group. You become a play. In movies, it’s right out of the script. You’re on, you’re off.”

“I don’t know what it was about it. It seemed to relax people, in a curious way. It didn’t ask anything of them.”

On actors watching their own films:

“You watch yourself in a very kind of removed way, and think: God, why did I do that? That’s why most actors won’t do it. They just don’t want to watch themselves. It’s too late to change anything.”

On inventing questions she was never asked:

“I’d like to be asked: Was I ambitious? I wasn’t. I wouldn’t use the word ‘ambitious’ to describe my sense of interest in being in the theater. I just wanted to do it. I just wanted to experience the fun of entertaining an audience. It had nothing to do with fame and fortune.”

On her first job:

“The other life I was kind of interested in, before I was plucked out of a job, working in a wonderful department store … in Hollywood. It was called Bullock’s Wilshire. It was a wonderfully designed Art Deco building. It is now a law library — it’s that beautiful. But in those days, the 1940s, it was the most chic and beautiful building and shop in Los Angeles. And I got a job there as a cashier and as a wrapper. That was my first job, anywhere, ever. I got 18 dollars a week, and it was great.”