A simple ‘thank you’ 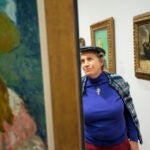 At Harvard, colleagues have chance to appreciate each other

“Thank you.” It’s all too easy to say, and too easy to overlook — especially when it comes to colleagues. But as Thanksgiving looms, the cue to give thanks gets louder.

This week, the Harvard Faculty of Arts and Sciences (FAS) is hosting its fifth annual Giving Thanks open house, welcoming its staffers to write personal messages of gratitude to colleagues and friends across the University. The next FAS open house will be on Thursday from 11 a.m. to 2 p.m. inside University Hall. Other departments have followed suit. Central Administration will host its open house tomorrow in the Smith Center Arcade from 10:30 a.m. to 1:30 p.m. All notes will be delivered via campus mail during Thanksgiving week.

Ruth Kolodney, an administrator in the Department of Philosophy, had a stack of notes to send, “mostly to my colleagues,” she said. “The people in payroll, the people who get me out of a jam, the people who help me on a regular basis, the people I don’t get to see as much as I’d like.”

Kolodney also turned out to donate to the Harvard Square Homeless Shelter. “I really like giving to them because everything goes to use and not to administrative costs,” she said.

Sam Parker ’15, a volunteer with the shelter, said staffers can bring by monetary donations, canned goods, toiletries, and warm clothes and blankets to combat the wintry weather.

Harvard employees can also donate to their charities of choice through payroll deduction via the Community Gifts Program, whose campaign runs through tomorrow.

Cassandra Fradera was persuaded by Department of African and African American Studies colleague Marva Bernard-Saunders to attend the open house. “She encouraged me to do this, so thanks to her that we’re here,” said Fradera.

“I did this last year with the Center for Workplace Development, and a lot of people I gave cards to were totally surprised. It’s nice in the holiday season to give back, and to do it in pen and paper.”