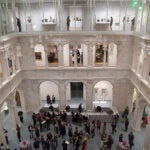 The Harvard Graduate School of Education (HGSE) will launch the Harvard Teacher Fellows Program next year to give undergraduates an opportunity to take courses and receive intensive, specialized training from HGSE faculty while still at Harvard College, tuition-free.

The program’s intent is both to persuade students to choose a career path in education over, say, Wall Street or Silicon Valley, and to build an effective teacher-preparation model that can be studied and, eventually, replicated. It’s the first time the School has undertaken such a project on this scale for undergraduates.

Dean James E. Ryan called it an appealing idea that has resonated with many people to whom he has spoken.

“I think there’s a shortage of high-quality teacher-preparation programs,” he said in a phone interview. “That’s part of it. And I also that think up until now, it’s not been a career that people with a lot of choices … that involve higher-paying jobs, that a lot of them consider. So part of this is to try and change that.”

Based on data that show close to one in five Harvard undergraduates now apply each year to participate in Teach for America, as well as anecdotal evidence from lecturer Katherine Merseth’s popular and highly-ranked course “Dilemmas of Excellence and Equity in K-12 American Schools” and sustained feedback from HGSE’s Undergraduate Teaching Education Program (UTEP), Ryan said the School is confident there is strong demand for this kind of offering.

The initiative is not an effort to copy what other teacher-preparation programs are doing, he said.

Ryan formally announced the launch of the $20 million program and $14.5 million in funding — including $10 million from two anonymous Harvard graduates, a gift from longtime Harvard supporters Richard and Ronay Menschel, and assistance from President Drew Faust — in a Nov. 2 letter to faculty.

“I think the fact that we were able to raise a large amount of funding for this quite quickly is a pretty good testament to the power of the idea,” he said.

“The Harvard Teacher Fellows Program will be an innovative and important contribution to strengthening K-12 education by giving new teachers the tools to succeed in the classroom and offering children throughout the country the transformative benefits of high-quality instruction,” Faust said.

Beginning next fall, the program will accept applications from seniors, with enrollment slated to start in spring 2016. The goal is to accommodate 100 Harvard seniors per year, with the students paying no tuition to participate and receiving modest stipends to help offset living expenses while they work part-time. The School will hire a faculty director for the program and four new faculty members, Ryan said.

Starting in January of their senior year, fellows will undergo eight months of mentored teaching with HGSE faculty and subject-focused coursework to become middle- or high school teachers in math, history, science, or English. They’ll enroll in one course at HGSE during their final spring semester and then take additional courses the summer after graduation, as well as begin teaching under the supervision of mentor teachers in the Cambridge-Harvard Summer Academy.

From there, students will be grouped together in district or charter schools in one of three to five U.S. cities collaborating with HGSE. They will teach part-time in the classroom and receive continued coaching and training with HGSE faculty, primarily via video conferencing and online coursework. At the end of that school year, the fellows will return to Harvard to take one final course before earning a preliminary teaching license. Those who choose to enroll in additional courses can earn a master’s degree from HGSE by summer’s end.

Although the criteria for admission haven’t been finalized, Ryan said a strong commitment to the profession will be essential.

“One criterion will be a genuine interest in teaching and teaching as a career. I don’t think ‘career’ in today’s world means a lifetime, but someone who is interested in five to seven years and … thinking about it as their job, their career,” he said. “That will be an important consideration.”