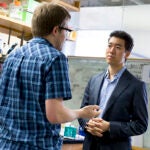 It helps mothers bond with their newborns, passes critical antibodies from mother to child, and contributes to infants’ psychological well-being. The benefits of breast-feeding are well understood by many mothers.

Unfortunately, it might also harm some children, particularly in disadvantaged countries and cultures. A new study conducted by S. Allen Counter, clinical professor of neurology and director of the Harvard Foundation, shows that high levels of lead, as well as other toxic metals such as mercury and cadmium, can pass from mother to child through breast milk. The study is described in a recently published paper in the Journal of Toxicology and Environmental Health.

“Lead is really the tip of the iceberg,” Counter said. “We also found elements like cadmium and mercury in breast milk. And more and more we’re finding that even in some cities in America, the levels of those elements are fairly high. I think this finding is a signal. It’s a warning to mothers that even in this country, even if there may not be evidence of lead in mother’s milk, that there are other elements that are equally if not more dangerous, and this may be something we should test for.”

While the study’s results should serve as a warning to mothers in the United States, it sounds an even more powerful alarm for the population involved in the study, the South American Quechua Indians.

Counter began working with the population nearly two decades ago, after discovering that their leading occupation — recovering lead from discarded automobile batteries and using it to glaze roofing tiles — exposed them to astronomically high levels of that and other toxic metals.

In earlier studies, Counter examined how high levels of lead affected the population’s cognitive levels, and other physiological effects. The idea to examine whether toxic metals could be passed from mother to child came from closer to home.

“The reason I started looking at this is because we find that, even here in the U.S., mothers don’t know about this risk,” he said. “What happens is the lead is absorbed in their bones, then during pregnancy it leeches out and saturates the uterus, it saturates the fetus, and it builds up so much that the level of lead in their milk is essentially equal to that of their blood plasma.

“These mothers are some of the most lead-poisoned people in the world,” Counter continued. “When I go to these villages, these beautiful children come out to greet me, and their teeth are black because they’ve absorbed so much lead.”

In an effort to stem the lead poisoning, Counter and his colleagues, with assistance from the David Rockefeller Center for Latin American Studies, launched the Lead Exposure Education and Prevention Program, an educational campaign designed to inform the population about the dangers of lead and what steps should be taken to avoid lead intoxication.

“We have shown over the past decade that through our education program, we can actually measure the reductions in lead exposure over the years,” Counter said. “Once the mothers realize this, they want to do something about it.”

Counter has worked with doctors in the Boston area to develop a chelation treatment regimen to help remove the lead from children’s blood, and has received thousands of dollars in donated medications from pharmaceutical companies.

“While we are pleased with the outcome of our lead exposure education and prevention program in the area, we remain guarded about the future,” Counter said. “Lead-glazed roof tiles are more durable and cosmetically appealing, and they are still in demand throughout Latin America. Unfortunately, it is only the poor, indigenous Andean Quechua Indians who are tasked to produce this valued ceramic commodity. Without continual education on the hazards of lead exposure by the Ecuadoran health authorities, the mothers will continue to pass toxic lead to their infants through their breast milk, and tragically induce neurodevelopmental disabilities in their children.”