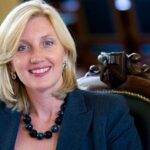 Heenan to step down in February

Cherry A. Murray, dean of the Harvard School of Engineering and Applied Sciences (SEAS), will receive the National Medal of Technology and Innovation, the White House announced today.

The medal is one of the nation’s top honors for achievement and leadership in the advancement of science and technology. Recipients are leaders who have made lasting contributions to America’s competitiveness and quality of life and have helped strengthen the nation’s technological workforce.

“These scholars and innovators have expanded our understanding of the world, made invaluable contributions to their fields, and helped improve countless lives,” President Obama said in a statement. “Our nation has been enriched by their achievements, and by all the scientists and technologists across America dedicated to discovery, inquiry, and invention.”

Murray, who also is the John A. and Elizabeth S. Armstrong Professor of Engineering and Applied Sciences and professor of physics, joined the Harvard faculty in July 2009 after a prominent career as an executive at Bell Laboratories and the Lawrence Livermore National Laboratory.

A celebrated experimentalist, Murray is well known for her scientific accomplishments using light scattering, an experimental technique in which photons are fired at a specified target. Scientists can then gather insights into surface physics and photonic behavior by analyzing the spray of photons in various directions from such collisions.

Her research has also addressed topics relating to soft condensed matter and complex fluids, hybrid materials that show the properties of different phases of matter. The control of suspensions, foams, and emulsions is relevant to the development of, for example, drug delivery systems and “lab-on-a-chip” devices.

Among other diverse topics in condensed-matter physics, Murray has studied nanostructures, phase transitions, optical phenomena in semiconductors, and controlled self-assembly of optical materials — all critical for the advancement of quantum optics, engineered semiconductors, and tools such as optical tweezers.

Born in Fort Riley, Kan., the daughter of a diplomat, Murray lived in the United States, Japan, Pakistan, South Korea, and Indonesia as a child. She received her B.S. in 1973 and her Ph.D. in physics in 1978 from the Massachusetts Institute of Technology. She has published more than 70 papers in peer-reviewed journals and holds two patents in near-field optical data storage and optical display technology.

The medal program was created by statute in 1980 and is administered for the White House by the U.S. Department of Commerce’s Patent and Trademark Office. Murray will receive the medal at a White House ceremony later this year.