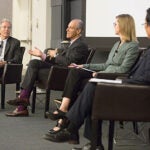 James Voorhies was looking down the ramp from the third floor of the Carpenter Center for the Visual Arts, toward the Prescott Street entrance of the new Harvard Art Museums. “How can you not want to walk up this ramp if you don’t know what it is?” he asked with obvious excitement.

Voorhies, the new John R. and Barbara Robinson Family Director of the Carpenter Center, was expressing his anticipation not only of the opening of Harvard Art Museums in November, but also the potential for the center. A former director of the nonprofit Bureau for Open Culture as well as an art history and critical theory teacher at Bennington College, Voorhies assumed his Harvard post in February.

Central to Voorhies’s vision for the Carpenter Center is the building itself, which was designed by the iconic French Modernist Le Corbusier (his only building in the United States) and opened in 1963. The building’s challenging design — a curvilinear mass supported by towering concrete columns, and that ascending S-shaped ramp, essentially splitting the structure in two — has in recent years been seen as more forbidding than welcoming.

It’s also not a very practical exhibition space. As Voorhies is quick to acknowledge, “There are no walls.” That is, most spaces in the building — studios and offices alike — are defined by floor-to-ceiling glass windows. The third-level Sert Gallery was essentially created by installing interior walls in what was originally conceived of as a floor-through space extending from window to window. Likewise the gallery space in the first-level lobby, which has required that new walls be created for every exhibit.

Voorhies’s solution, whenever possible: “No walls.”

“I’m trying not to build a lot of walls but to really work with the space,” says Voorhies, going back to the original conception of the building, what he wryly refers to as “Le Corbusier’s zero.” The ramp, the containment of open spaces — both public and private — encompassed by glass walls, was supposed to make the building more inviting, blurring the distinction between outside and inside, drawing the visitor in.

Voorhies’s philosophy is to “use the space as it is, rather than forcing it into a white cube” of the typical art gallery.

In that regard, for the late-summer/early-fall visiting faculty exhibit, he installed mobile panels instead of the usual dry-wall mounts. In early October, the same panels become a stage backdrop and movie screen for a presentation by Naomi Yang ’86 and Damon Krukowski ’85. Yang screened her short film “Fortune,” while the duo (who record as Damon & Naomi, and both formerly performed with the indie-rock band Galaxie 500) sang and played live accompaniment. The event drew an estimated 150 people.

Voorhies has undertaken an ambitious program of visiting artists, who he hopes will engage various departments of the University with layered, multidisciplinary projects. He also commissioned a new website, hoping for a stronger connection with the Harvard community and beyond.

“So many people on campus haven’t heard of the Carpenter Center,” says Voorhies. “Or if they have, they haven’t been here.”

As director, Voorhies is charged with exhibitions and programming. But the building also houses both the Department of Visual and Environmental Studies and the Harvard Film Archive, whose director, Haden Guest, initiated the Damon & Naomi collaboration. It’s that kind of collaborative use of the center’s resources — and “controlled, haphazard” use of the space — that Voorhies hopes will become part of a much broader agenda. “My job is to produce exhibitions, but with an overarching vision of how they connect to the academic life.”

In the center’s offices, he produced a press release announcing the building’s opening in 1963, stating the Carpenter’s “educational task in making students from all departments of the University more intensely aware of their visual environment.” It was a sentiment reinforced in the 2008 report by the University’s Task Force on the Arts, which asked, “How can the visual arts connect with all students in all disciplines in Harvard?”

To that end Voorhies is bringing in artists whose work could suggest a range of connections for a broad spectrum of faculty and curriculum. For instance, the British artist Simon Fujiwara, whose exhibition “Three Easy Pieces” opens Oct. 23, creates multimedia installations that touch on issues of race, sexuality, and gender. Voorhies is also excited at the prospect of Fujiwara, who teaches in London, making studio visits and working with students. He’d like to see visiting artists making repeated visits over a few years, forging connections with the Harvard community, and ultimately creating site-specific installations commissioned by the Carpenter Center.

“It’s the basis of not only presenting something that’s unique in response to the building, but also a way to have an artist here with us on a longer-term basis. So you get two things at once — you get the artists and the connection to them, and an exhibition that can’t happen anywhere else but in this building.”