Study of lizards shows trade as a force in biodiversity 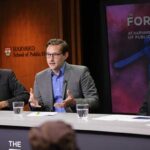 A wake-up call on Ebola

It may be a cliché to say it, but the world is getting smaller. For those able to afford a ticket, there is virtually no corner of the world that can’t be reached in a matter of days.

And humans aren’t the only ones affected by this unprecedented level of mobility.

New research shows that trade is one of the major drivers of biodiversity among lizard species in the Caribbean islands. The study was co-authored by Jonathan Losos, the Monique and Philip Lehner Professor for the Study of Latin America and curator in herpetology at Harvard’s Museum of Comparative Zoology; Matthew R. Helmus of the Amsterdam Global Change Institute; and Luke Mahler, a former Harvard Ph.D. student now at the University of California, Davis. It is described in a paper in Nature.

“One of the key concepts in the theory of island biogeography is the idea that isolation plays an important role in biodiversity, because the more isolated an island is, the fewer species it will have,” Losos said. “Naturally, isolation is largely a function of distance, but Matt’s idea was that geographic isolation isn’t as relevant today, because humans can easily move between islands and can bring lizards with them. Instead, we chose to measure isolation in economic terms, and sure enough, we found that the amount of trade an island receives can explain to a large extent the number of invasive species on an island.”

The study offers one of the few large-scale tests of theories first proposed by E.O. Wilson, the Pellegrino University Professor Emeritus, in his seminal 1967 work “The Theory of Island Biogeography.”

In attempting to explain the biodiversity of islands, particularly the variation in species number from island to island, Wilson and co-author Robert MacArthur advanced a handful of simple ideas, including the notion that bigger islands, with more habitats and support for larger populations, could hold more species.

As a counterbalance, Wilson and MacArthur said that an island’s isolation was also a powerful driver of biodiversity, with more isolated islands — because they are far more difficult for new species to colonize — having fewer species.

Islands, depending on their size and level of isolation, reach an equilibrium that allows a particular level of biodiversity, Wilson and MacArthur found. In the decades since its publication, Losos said, the theory has become hugely influential, but remained frustratingly hard to test.

The spark for the new study came from Helmus, who approached Losos with the idea of studying the introduction of anole species to new islands throughout the Caribbean.

“The idea was to review the literature and reports from the field and create a database showing how the species richness has increased because humans have introduced new species to many of the islands in the Caribbean,” Losos said. “In essence, this is testing the equilibrium theory in a way that’s never been done before, because if humans are increasing the rate of colonization of islands by new species, according to the theory, we would expect to see the equilibrium change.”

In line with the theory, researchers found that as an island became less isolated due to an increase in human-assisted colonization, its area became a far more significant factor in determining biodiversity.

“Humans have changed what it means for these islands to be isolated,” Losos said. “And it turns out that, due to geopolitics, there is a particularly good example of this, and that’s Cuba. What we found is that larger islands tend to see more trade, and as a result see more colonization, but Cuba is an outlier because of the U.S. trade embargo. When we looked at the literature, we found there are zero introduced species there. Thanks to the quirks of politics, it’s the exception that proves the rule.”