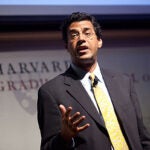 For decades, scientists assumed that the relatively small pelvic bones found in whales were simple remnants of their land-dwelling past, “useless vestiges” that served no real purpose, akin to the human appendix or tailbone.

A new study, co-authored by Erik Otárola-Castillo, a fellow in David Pilbeam’s paleoanthropology lab in the Department of Human Evolutionary Biology, suggests that the bones, in fact, have a very specific purpose — particularly when it comes to making baby whales and baby dolphins. The research is described in a recent paper in Evolution.

In cetacean species, promiscuous mating behavior is associated with the intensity of male competition for females. Due to this high demand, female cetaceans can become choosier and mate only with males they perceive to be of higher quality. At least one female whale, for example, has been observed to surface “belly-up” in an attempt to resist undesirable males.

Working with Jim Dines and Matthew Dean of the University of Southern California, Otárola-Castillo discovered that males have circumvented the problem by evolving longer penises relative to body size. Also, the male pelvic bone anchors the muscles that control movement of the penis.

Otárola-Castillo also quantified and compared the pelvic shape of several sister-species that had widely divergent levels of promiscuity and found the divergence in pelvis shape was extremely high. The more promiscuous the mating system, the less simple and more convoluted the shape of the pelvis.

“At the less promiscuous end of the spectrum, the pelves look quite straight, possessing little curvature,” he said. “On the other hand, the pelvis bones of the more promiscuous species are much more curved and contorted.”

As to the reason for such divergence between closest relatives, Otárola-Castillo thinks that sexual organ control might be particularly important.

“In some species, females may mate with multiple males in a relatively short time,” he said. “I know of at least one occasion when a female whale was observed mating with more than one male at the same time. Only one male will win this competition by inseminating the female and ensuring a chance to pass his genes along. This degree of competition creates a sort of sexual-organ arms race.”

A more complex pelvic bone may offer many more locations for anchoring muscles controlling the penis. Males could have evolved a high degree of control in an effort to win out over their competition — and thus pass on their genes to the next generation.

The pelvic bones of whales are “one of the classic examples of a vestigial structure,” said Otárola-Castillo. “But what we found was that the shapes of these bones are highly associated with the mating systems of these whales and dolphins — species that are more promiscuous have more-complex-shaped pelves.”

To determine whether whale pelves still have a function, Otárola-Castillo and his colleagues created detailed computerized models of the pelvic bones of more than 100 species, and used custom-designed software to examine their shapes in three-dimensional space.

Otárola-Castillo had developed the software with colleagues at Iowa State University as part of a project comparing scallop shells. He quickly realized that it could be applied to other fields.

“I started my academic career as an archaeologist,” Otárola-Castillo said. “I’ve always thought about the possibilities of comparing the shape of prehistoric arrowheads and projectile points in their true three-dimensional form. I had no idea how to conduct such comparisons until I took a course in biology and statistics when I was a master’s student in archaeology. There the professor showed how biologists were starting to statistically compare shapes in 3-D. I was sold. This was one of the reasons I moved over to evolutionary biology and statistics. I realized the same analytical tools and technology used to compare biological shapes could be used to compare the shapes of archaeological artifacts.”

“The advent of computing and computerized biology and development of statistical tools in particular is really helping us learn new things. This technology is allowing us to start asking a number of new questions that we couldn’t have imagined until fairly recently.”