Six decades of science as diplomacy 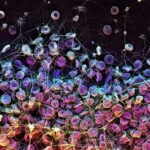 When you think of the Large Hadron Collider at CERN in Switzerland, you may think of cutting-edge equipment and particles circling unimaginably fast, colliding into each other to make bosons and other elements of the secrets of the universe.

But you may not think of the people.

Of course they’re there, and essential — thousands of scientists and support personnel, including Harvard physicists and students, some of whom played important roles in the 2012 discovery of the Higgs boson, the heaviest and most elusive particle discovered so far.

This month, the Harvard Physics Department and swissnex Boston, a cultural and technological exchange effort by the Swiss consulate, are sponsoring a photo exhibit that focuses on the people of CERN — laughing, napping, and thinking — and the sometimes ordinary-looking places where they unearth the extraordinary.

The exhibit is part of a monthlong celebration by the Physics Department and swissnex of 60 years of science at CERN, the European Organization for Nuclear Research. The post-war project was established to foster peaceful scientific exchange among nations.

Alexandra Zingg, project leader for swissnex, called CERN “one of the highest achievements in science diplomacy” in history, with 21 member states and many more contributing nations. With unrest around the world, the idea of CERN as a center of peaceful inquiry is as relevant today as ever, she said.

Zingg joined members of the Harvard physics community and several artists, including a former resident artist at CERN, Julius von Bismarck, and Andri Pol, the photographer whose images are on display at the Science Center, at an event to open the exhibit.

“It was about 22 years ago that I went to CERN for the first time,” said Morii. “It was my first trip outside of Japan and I was working for my Ph.D. thesis. I worked there four years, got my Ph.D. and ended up here. If not for the hospitality of the Swiss people, I probably wouldn’t be here.”

The photos are part of a collection of 300 images included in Pol’s book, “Inside CERN,” which was published in February. Pol said he snapped the pictures over the course of two years, though he confessed he missed one of the center’s biggest moments, the announcement that physicists had discovered the Higgs (he was traveling in the Amazon).

Pol said he wanted to focus on scenes too often missed in typical images from CERN.

“You never get to see what’s happening, the buildings and the people,” he said, adding that, given the subject, he’s happy that the images are being displayed at the Science Center rather than in a museum. “I really like that it can be seen by people who know something about it.”

A film screening of “Particle Fever” will be held from 6 to 8 p.m. today at the Science Center, 1 Oxford St., Lecture Hall D, Cambridge. Seating is limited and registration is required.