Rowing toward the Head of the Charles 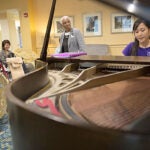 The heavyweight Radcliffe women’s crew team was training on the Charles River. It was early morning, rainy and cold, and the bumpy boat could prove a brutal ride to anyone not used to it. But for the women of Radcliffe, it was just another day.

“Get out the shoulders to the power zone!” yelled head coach Liz O’Leary.

“We train 16 to 20 hours a week” said Lauren Tracey ’16, who has been rowing since eighth grade. “We usually row in the morning and do weight training in the afternoon. We train every day. We only have Sundays off. It’s a big commitment, but I love it, my team and rowing.”

Usually after the morning training, the young women share breakfast in the Eliot House dining room, catching up on homework or the latest gossip. Sofia Donnecke ’18 said that because of the training schedule, team members have to sleep early and eat plenty. She arrived in Cambridge from Canada three months ago, but has already made good friends on the crew.

“I remind them of their goals a lot,” said Jenny Wong ’15, a coxswain. “Even though I’m not rowing, I’m just as much in the boats as everyone else. I’m like the in-boat coach, leading the boat and giving motivation.” As to her style of coaching, she said, “I would definitely say I’m the tough one. You have to be. Rowers, they want to be pushed, they want to accomplish the best they can. And when you’re really tired, your own brain makes all sorts of excuses for you. You need someone to make you stick to you guns.”

In recent days the Radcliffe crews spent their practice preparing for the 50th annual Head of the Charles Regatta, held over the weekend.

Before Sunday’s match, O’Leary set the challenge: “Championship 8, it’s an open event. We have the U.S national team that just won the gold metal. We are racing against them, so will we win? Probably not. There are several national teams. But it’s great, it’s so much fun, because we never have the chance to see how competitive we can be against national team boats.”

O’Leary had several goals for the Radcliffe heavyweight women. “You look at the collegiate field; we hope to be one of the top collegiate teams among the 40 racing,” she said.