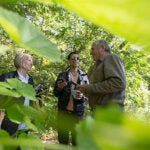 A walk on the wild side

The thighbone is connected to knowing when species interbred, how they migrated

New research on a 45,000-year-old Siberian thighbone has narrowed the window of time when humans and Neanderthals interbred to between 50,000 and 60,000 years ago, and has shown that modern humans reached northern Eurasia substantially earlier than some scientists thought.

Qiaomei Fu, a postdoctoral fellow at Harvard Medical School (HMS) and first author of a paper describing the research, said the sample had a long history before making its way into her hands.

The bone was found eroding out of a Siberian riverbank, but no one knows precisely where. The bone changed hands several times before finding its way to the Max Planck Institute for Evolutionary Anthropology in Germany, where Fu was working with professors Janet Kelso and Svante Pääbo. Fu put the finishing touches on the research after she started in the laboratory of David Reich, HMS genetics professor.

Carbon dating and molecular analysis filled in many of the blanks about the sample. Testing determined that the sample was from an individual who lived 45,000 years ago on a diet that included plants or plant eaters and fish or other aquatic life.

Reich and Fu said the sample was remarkable because of the extraordinary preservation of its DNA, which allowed Fu, using the latest techniques for ancient DNA analysis, to extract a high-quality genome sequence. The sequence, Reich said, is significantly higher in quality than most genome sequences of present-day people generated for analysis of disease risk.

The sequence revealed that the bone came from a modern human, a man whose remains are the oldest ever found and carbon-dated outside of Africa and the Middle East. Comparison to diverse humans around the world today showed that the man was a member of one of the most ancient non-African populations.

“The ancient Siberian was related equally to West European hunter-gatherers, North Asian hunter-gatherers, East Asians, and the indigenous people of the Andaman Islands off South Asia,” Fu said. “The fact that this population separated so early indicates that theories of an early split of people who followed a coastal route to Australia, New Guinea, and coastal Asia are not strongly supported by this data.”

The research, the forefront of which was in Germany and involved international collaborators including Reich, was published today in the journal Nature.

One important aspect of the research is that it obtained a high-resolution estimate of the mutation rate in humans, Fu said.

Prior research had given scientists evidence of two possible rates, one twice as fast as the other. Because of this large range, dates obtained from genetic studies have tended to be quite uncertain. By measuring the number of mutations missing in this individual and comparing with people now, Fu was able to obtain an accurate estimate of the rate that mutations accumulated over time. Her work came down definitively on the side of a slower mutation rate, corresponding to between one to two mutations per genome per year.

“This is a huge biological result. It’s very important,” Reich said. “I was a partisan of the fast rates until I saw these results. Qiaomei’s work convinced me that the slow rates were correct.”

Reich said the findings on mutation rate have sweeping implications, and provide a basis for reinterpreting key dates in human prehistory. Instead of humans and Neanderthals becoming distinct offshoots sometime between 270,000 and 380,000 years ago, for example, the slower rate would put that shift much further back in time, between 550,000 and 770,000 years ago. Similarly, the slower rate pushes back estimates for the date of the separation of African and non-African populations.

“The slow mutation rates indicate that the present-day subdivisions among human populations date back to almost 200,000 years ago, well before the period around 50,000 years ago when the archaeological record documents art and new styles of toolmaking,” Reich said. “The implication is that the spread of modern human behavior must have been cultural, at least in part. Based on the genetic dates, it cannot be the case of a single population that developed modern human behavior spread all around the world replacing the other humans who already lived there.”

In examining the ancient Siberian’s ancestry, Fu found about 2.3 percent of his DNA came from Neanderthals. That is a bit higher than found in modern humans living outside Africa today — a level that ranges from 1.7 to 2.1 percent — but too small a difference to be statistically significant, Fu said. Her findings on the date of human-Neanderthal mixing dramatically narrowed the likely range to between 50,000 and 60,000 years ago, a much tighter window than the previous range of between 37,000 and 86,000 years ago.

“It’s like going up close to something with a camera,” Reich said of getting high-quality data from a specimen this old. “You just get a much better picture. … You can see big bits of Neanderthal ancestry not yet digested by the process of human biology.”

The ancient Siberian’s DNA also contained pieces of Neanderthal DNA that were longer than researchers expected. DNA contributed from any individual is broken into smaller pieces with each passing generation during the normal mixing of maternal and paternal genetic material. The longer stretches of Neanderthal material, Reich and Fu said, may be the signature of mixing between Neanderthals and the ancestors of the Siberian individual within a few dozen generations of when he lived, though additional research is needed to ascertain that.

“There are lots of potential confounders, so we wanted to be conservative,” Fu said. “Even if we cannot be sure of whether all the interbreeding occurred at once, the big picture is that we can be sure that the recent ancestors of this individual interbred with Neanderthals.”