Mixed results in report on concussions 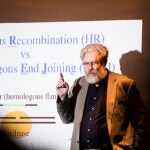 While most colleges and universities in the National Collegiate Athletic Association (NCAA) have created programs to help diagnose and treat concussions sustained by their athletes, many do not fully meet the NCAA’s standards, according to new work by Harvard researchers.

The report, the first-ever comprehensive examination of how colleges and universities have complied with the NCAA Concussion Policy and Legislation, is based on a survey sent to all 1,066 NCAA member institutions, 907 of which responded.

The results were mixed, according to co-first authors Christine Baugh, a student in Harvard’s Health Policy Ph.D. program, and Emily Kroshus, a postdoctoral fellow at the Harvard T.H. Chan School of Public Health. Though more than 90 percent of schools say they have a concussion-management plan in place, compliance with NCAA requirements trails that number. The study is described in an Oct. 21 paper in the American Journal of Sports Medicine.

“The NCAA concussion policy, put in place in 2010, requires several things,” Baugh said. “Athletes suspected of sustaining a concussion must be removed from play and medically evaluated. If they are diagnosed with a concussion they cannot return the same calendar day and must receive clearance by a physician or physician’s designee before returning. In addition to these measures, the NCAA also requires that athletes are provided with concussion education annually and that athletes acknowledge their role in reporting concussion symptoms to medical personnel.

“Despite the rules being in place for four years, they’ve never been evaluated, and it is concerning that there are still NCAA schools without a concussion-management plan in place,” Baugh added. “Schools aren’t mandated to tell the NCAA if they have a plan — the entire compliance mechanism relies on schools self-reporting violations.”

Kroshus said, “This study suggests that most, but not all, schools are meeting the minimal level set by the NCAA’s concussion policy. Most critically, only around three-quarters of schools are providing their athletes with concussion education. Providing athletes with some information about concussions is a start, and the fact that not all institutions are meeting this relatively feasible component of the NCAA’s concussion policy is a concern.”

As an example, Baugh pointed to the requirement to educate athletes about the risks and symptoms of concussions.

“In our previous pilot study, we found that education that complies with this policy can take the form of anything from a lecture with multimedia led by a physician, to sending an email, to putting one pamphlet in the locker room for an entire team to look at,” Baugh said. “Given that this sort of broad-strokes guidance allows for such divergent implementation in the education facet of the policy, who’s to say it’s not going to result in the same divergence across the board?”

Echoing this concern, nearly 40 percent of respondents identified concussion education among coaches and athletes as an area in need of improvement.

While the results suggest a need for stronger regulations, enacting such changes requires a lengthy NCAA legislative process, and would ultimately have to be approved by all member schools. Baugh and Kroshus acknowledged the challenges in amending the concussion policy.

“Changing any NCAA policy is difficult,” Kroshus said. “That is not to say that change isn’t needed or should not be attempted, but it’s important to recognize the barriers and challenges to quick solutions. Not many people are aware that the NCAA is a member-driven organization and that for any change in any policy to be enacted it has to be voted on by all the member schools. This process, unfortunately, takes time and takes all stakeholders being on board.”

By providing concrete evidence of where the current regulations have been successful and where they need improvement, Baugh and Kroshus hope that their research can accelerate that process.

“We hope our work will encourage the NCAA and the administrators at the member schools to take seriously the need to revise the content of the NCAA concussion policy, and the need to figure out ways to encourage compliance,” Kroshus said. “The NCAA can, and in my opinion should, actively monitor that all institutions have a concussion-management plan. However, figuring out how to most effectively and feasibly encourage implementation is a much more difficult proposition given the multifaceted nature of effective concussion management.”

There appears to be some willingness among NCAA officials and member schools to revisit concussion policies, Baugh said. Earlier this year, she noted, additional guidelines were published to clarify some areas of the NCAA policy and provide more comprehensive best-practice recommendations. Just recently the NCAA’s president, Mark Emmert, has expressed interest in working to toughen and clarify policies on how member schools should handle concussions.

“Perhaps this information can help spark the legislative process,” Baugh said. “Our ultimate goal is to effect change. Understanding current levels of compliance with the NCAA concussion policy is an important first step in that process. Ensuring that the rules currently in place to protect athletes reliably and uniformly achieve their goal is essential. The NCAA was founded to protect the health and well-being of collegiate athletes; we hope that evidence from this study will assist them in achieving this mission.”