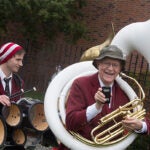 Physicist has a passion for distance

For plenty of runners, covering the 26.2 miles of a marathon is the ultimate achievement, something they might do once in a lifetime, if at all.

For Jenny Hoffman ’99, a marathon was just a good place to start.

An associate professor of physics whose work focuses in part on superconductors, Hoffman has used her spare time to make a mark in the world of ultrarunning. Last month in Cleveland she brought home the 2014 national championship in USA Track and Field’s 24-Hour Run, posting a final distance of more than 127 miles.

Ultrarunning contests often stretch beyond 100 miles, lasting a day or more. And while Hoffman understands that many people might see running from Boston to the New York border in 24 hours as a peculiar passion, for her, the seeds of the sport were planted early on.

“I’ve always run. I ran track in high school — I wasn’t very good, but I’m really competitive and really stubborn, so I naturally gravitated toward the longer distances, where hard work matters a lot more than talent. I had a field hockey coach in high school who, at that time, held the American record for the 100 miles, and I thought that was really cool, so I got it in my head that someday I would run 100 miles.

“Running is great because it depends on hard work,” she continued. “It doesn’t depend on luck, or on what other people think … it just really depends on hard work. It’s really satisfying, especially when I get very busy, and have 400 things on my to-do list, and I can get only two of them done in a day. That can become very stressful, whereas running — I go out for a run and there’s one item on the to-do list, and it’s run.”

Those runs have been about more than personal achievement.

Six years ago, shortly after a colleague at Harvard gave birth to a child with Down syndrome, Hoffman decided to use one of her races as an opportunity to support the Special Olympics, and eventually raised more than $3,000.

Mindful of another physicist friend who recently had a daughter with Down, Hoffman contacted more than 300 friends and colleagues ahead of the Cleveland race, asking that they donate to the charity. She also contributed half of her winnings. In all, she has helped raise more than $11,000 for the Special Olympics.

“Running and having this outlet and this community is so meaningful to me, and I wanted to support an organization that provides that for others who face challenges far greater than my own,” Hoffman said. “I think the Special Olympics is a fantastic organization, and this fundraiser has also been fantastic for my friend to see the support of the physics community.”

In the case of the Cleveland race, the “course” was just under a mile long. Races are designed that way, Hoffman said, to facilitate counting mileage — a shoe chip triggers each time the runner passes the timing mat. And the design is not without benefits for the athletes. The loop course allowed Hoffman’s husband to stay in one location with whatever she needed — from water to Gatorade to protein bars, and then, as the 24-hour race wore on, Coke to help her stay awake.

Though her interest in running dates to high school, Hoffman’s first foray into distance competition didn’t come until she was about to graduate from Harvard College. On a lark, she said, she and her future husband decided to run the Philadelphia Marathon. She was immediately hooked.

“It was the most amazing experience. People were cheering for each other, and that was so different from any other race I’d ever done. At these long distances, everyone is hurting, everyone is working hard, and the idea is that we’re all in it to finish and do the best we can, so we can all root for each other. It was really an eye-opening experience for me.”

Over the next several years she continued to run marathons, including four in Boston, and eventually decided to dip a toe into the world of ultrarunning, first with 50K and 100K races, and then, two months before joining the Harvard faculty, a 100-mile race.

“When I did the first [100-mile race], I wasn’t thinking it would be a long-term thing, I thought maybe it … would be a one-off, something you do and cross it off your bucket list,” Hoffman said. “But it was really a great community.”

During much of that first year at Harvard, running took a back seat to career concerns, but by December the itch for competition was impossible to resist and Hoffman signed on for her first 24-hour race, on New Year’s Eve 2005 in Arizona. She finished first among women. Later she discovered she hadn’t been alone on the course.

“It turned out I was actually pregnant during that race,” she said. “So the family joke now is that my husband finished first, I finished second, and the little guy finished third. So the whole family took the podium.”

Over the next eight years, Hoffman dedicated herself to career and her growing family. She recently welcomed her third child.

Though her 127-mile finishing distance wasn’t enough to qualify her for the national team — several runners have posted longer distances in other races — the window is open through December, so Hoffman may yet pursue a spot on the squad. But that decision will not be hers alone.

“I love it, and was immediately excited to sign up for my next race,” she said. “But I really have to let my family recover before I do it again. To run this far, you need a lot of support — you need a lot of time to train.”