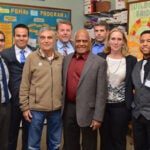 The power of ‘we’

“The consummate mayor of the people, for the people,” Harvard President Drew Faust intoned on a sunny Commencement Day in May 2013, “an urban mechanic turned urban legend, whose love of his city and passion for its betterment have made and kept Boston strong: Thomas M. Menino.”

Those words, delivered just six weeks after the Boston Marathon bombings gave the phrase “Boston Strong” lasting heft, were part of Faust and Harvard’s poetic ritual conferring an honorary doctor of laws degree on Menino. More than a year later, the words also reflected reactions across the Harvard community to the news that Boston’s longest-serving mayor — who left office in January after 20 years at the city’s helm — had died of cancer at age 71.

Those recalling Menino talked today about his passion for Boston and its institutions — including its universities and teaching hospitals — his tireless work on their behalf, and his attention to the city’s people, whether in positions of authority or students taking the first steps on career paths, some of which led to Menino’s office.

“No one I’ve known has personified Boston’s heart and soul, its drive and its resilience, more than Tom Menino,” Faust said. “I have been privileged to call him a mentor and a friend. He lived a life full of purpose, always guided by a devotion to improving the lives of the people he served. He was a strong and true friend of education, and he knew how much the pursuit of education and research means not only to Boston, but to the larger world. All of us can learn from his powerful and humane example, and his countless friends and admirers across Harvard will greatly miss and long remember him.”

Meredith Weenick came to Harvard earlier this year as vice president for campus services after 12 years as Menino’s chief financial officer. She said he had been her boss, friend, and mentor, and called him a man who, though he could be tough on policy issues, in his personal dealings was strikingly kind.

“Obviously, I’m very saddened by his death. He was a terrific leader for the city of Boston and exciting to work for,” Weenick said. “He cared deeply about people. It was how he governed and how he lived his life.”

At the Harvard Kennedy School (HKS), Linda Bilmes, the Daniel Patrick Moynihan Senior Lecturer in Public Policy, and Edward Glaeser, the Fred and Eleanor Glimp Professor of Economics, both got to know Menino better by watching him interact with their students.

Glaeser, who is also director of the Rappaport Institute for Greater Boston, sends summer interns to Boston each year, while Bilmes’ students have interacted with local leaders, including Menino, as part of a class she teaches that involves students in helping develop solutions for real-world challenges faced by local government.

“Every time those students came in and did a project, they became important people to him,” Bilmes said of Menino. “I absolutely loved him, loved watching him function. He had a singular style, his own way of connecting with people, completely without pomp. It’s a huge loss.”

Menino, known as “the urban mechanic” for his roll-up-the-sleeves style of governing and his effectiveness in executing that approach, leaves a legacy that reaches far beyond Massachusetts’ borders, Glaeser said.

“He was very much a mayor’s mayor. He’s a mayor who is widely seen as being an exemplar of excellent urban leadership,” Glaeser said. “He managed to combine — in a way that I think few other leaders managed — managerial competence and openness for things that are almost technocratic, but he always pulled it off with a profoundly human face.”

“It is with profound sadness that we received the news today about Mayor Menino,” Ellwood said. “Tom Menino was a committed, thoughtful, and forward-looking leader who guided this city and the region during an incredible period of change and growth. He was a powerful force who used his great skills and passion for the public good. He was an inspiration to the citizens of Boston as well as to the entire Harvard Kennedy School community, and he will be dearly missed.”

“When I think of Tom — everybody seems to have known him — something like 70 percent of the people in Boston had met him personally,” O’Donnell said. “He was honest; he was authentic. Twenty years in office, no scandal, no nothing. What you saw is what you got with that guy. Boston came a long way under his tutelage, and I don’t think that would have happened if he were a typical politician.”

Faust was introduced to Menino by O’Donnell after she was named Harvard’s president, and she recalled having occasional breakfasts and thoughtful conversations with the mayor. She also recalled his inspiring leadership after the Marathon bombings, when he stood and spoke despite a broken leg, in an example of his selfless dedication to the people he served.

“If we could have that model of leadership and service spread more broadly,” Faust said in an interview with The Harvard Crimson, “we would be a far better world.”

“Tom Menino was the ultimate American mayor. He cared so much for every neighborhood , every institution, and every citizen of his city. Boston is a much different and much better place for his service,” said Lawrence H. Summers, president emeritus of Harvard and the Charles W. Eliot Professor of Harvard University. He added that Menino “was a great friend to Harvard and to me. In his own unique way, he saw how by working together a great university and a great city could be greater still.”

Christine Heenan, Harvard’s vice president for public affairs and communications, worked with Menino on Harvard initiatives involving the city. She said he had a deep appreciation that Boston’s colleges, universities, and teaching hospitals all contribute to making Boston the strong center of technology, science, and creativity it is. But that didn’t mean he went easy on them.

Instead, Menino held them — including Harvard — accountable to their host city. Heenan said he wasn’t afraid to let them know if he thought they fell short, as he sometimes did when he thought that the University’s and the city’s priorities didn’t align.

“He held Harvard to a very high standard and had a relentlessness in enforcing that standard,” she said. “It was always because he wanted Harvard to do the right thing.”

Heenan, who was Menino’s host during the 2013 honorary degree ceremony, said that moment meant a lot to him, and he wanted to make the most of it.

While Menino would interact on equal footing with people from all walks of life, Heenan said he wasn’t shy about using the power of his office to get what he thought was important, and the people in Boston’s neighborhoods were the beneficiaries.

Among those people have been some who came to Harvard. Isaac Buck, a junior history concentrator from Adams House, grew up in Roslindale, in the district that Menino represented during his time on the City Council before becoming mayor. Buck, who attended public schools and Boston Latin School, said that, like most city residents, he’d had several encounters with Menino over the years, including at youth soccer cookouts, his Little League parade, church events, and concerts at Adams Park.

“One of my favorite interactions with him was when I was in first grade, and it was the ribbon-cutting for the new playground at the Charles Sumner School in Roslindale. My mom was a teacher at the Sumner, and so I went up to the mayor, told him that my mom works for him, and asked if he knew her. He smiled, assured me that he did know her, and shook my hand,” Buck said.

“When I heard that he was stopping his cancer treatment, I assumed that he would have a few months left. So my first reaction upon hearing that he’d passed was shock. Until Marty Walsh was elected last year, Mayor Menino was the only mayor that I’d known. He was omnipresent in my growing up in Boston, and he was the type of household name that you assume will never go away,” Buck added.

“The country knew him as a leader on gun control, a supporter of LGBTQ rights, and the face of the city after the Marathon bombing last year. He certainly was all of those things, but he was also the mayor who read to my mom’s class and who put a grocery store in every neighborhood. He loved this city, and this city loved him.”

Mayor Thomas M. Menino spoke at the Harvard School of Public Health in 2013 as a part of the Decision-Making: Voices from the Field series about his work on nutrition, affordable housing, ethnic health disparity, and substance abuse.