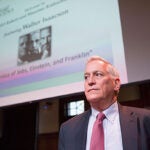 Ghosts in the machines

Scientists from Harvard University and the Massachusetts Institute of Technology have developed a theoretical model of a material that one day could anchor the development of highly efficient solar panels.

Traditional organic solar panels work by combining photons with light-sensitive materials, creating particles called excitons. Those particles are then channeled through the material to an interface, where they dump energy into electrons that flow along wires, producing electricity. The problem is that excitons aren’t easy to control. The particles are often trapped by defects in the material, and release their energy as light, reducing the efficiency of the panels.

Inspired by cutting-edge theories in condensed matter physics and the development of quantum computers, the Harvard-MIT group used magnetic fields to force excitons to move in a specific direction, avoiding the traps that plague traditional materials. The system is described in a paper in Nature Materials.

The research team was led by Professor of Chemistry and Chemical Biology Alan Aspuru-Guzik and included Joel Yuen-Zhou, a former Ph.D. student in Aspuru-Guzik’s lab who is now a postdoctoral fellow at MIT, and research associate Semion Saikin.

“This effect has been identified in physics, in what’s called the quantum Hall effect, and in topological insulators, but we believe this is the first time this has been proposed in a practical way for excitons in molecular layers,” Aspuru-Guzik said. “What we wanted to ask was, can this be done in organic materials? Can you custom-tailor an organic material in such a way that, for certain excitation energies, excitons move in one direction, and when they confront obstacles, they can move around them?”

Yuen-Zhou and Saikin began searching for molecules that fit a tightly defined set of criteria, and eventually settled on porphyrins, in part because they have been extensively studied.

“These are just one example of a molecule that could work in this system,” said Saikin. “We don’t want to say that, experimentally, one has to do it with these molecules, but conceptually, we’ve shown that the electronic structure of these molecules is convenient for this system.”

The system described in the paper, however, is about more than simply creating a film of porphyrin molecules.

For the design to work, the team outlined how magnets could be used to prepare the molecules in specific quantum states to ensure they don’t interfere with one another.

“In the absence of a magnetic field, it’s equally likely the excitons would go in one direction or another,” Aspuru-Guzik said. “We use some very clever quantum tricks, to ensure that, when we apply the field, one direction becomes more preferential.”

Just as cars sitting in traffic on the highway are unable to turn around and drive in the opposite direction, Aspuru-Guzik said, excitons in this system are able to flow in only one direction, around the edges of the film.

What’s more, Yuen-Zhou said, the quantum mechanics of the system permit a good deal of flexibility, allowing excitons to flow around defects in the material, just as a stream flows around obstructions.

While it may be years before the material finds its way into commercial solar panels, Aspuru-Guzik believes it has the potential to increase their efficiency by creating a flow of excitons that moves along the panel’s interface, more efficiently transferring energy into electricity.

“What we’ve done with this paper is a proof of concept, and we hope it’s the opening to a new era of excitonics.”