Making ‘The Friedkin Connection’ at Harvard 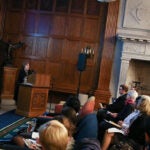 Is that Wallace Stevens?

Movie marathons are no longer the exclusive domain of Saturday matinees. In recent decades, scholars have recognized the value of films as texts across many disciplines. A recent gift to the Harvard Library from Academy Award-winning director/producer William Friedkin provides a new trove for researchers to explore religion, politics, morality, and culture in post-classical Hollywood.

Friedkin played a pivotal role in the so-called New Hollywood, which reinvented the art and industry of Hollywood filmmaking in the 1970s. His gift includes 35mm exhibition prints of his canonical feature films, most notably “The Exorcist” and “The French Connection,” as well as working materials for his 2013 memoir, “The Friedkin Connection.”

“Friedkin’s works were subversive and anti-establishment. He played a huge part in the reconfiguration of the rules of popular cinema,” said Haden Guest, director of the Harvard Film Archive, which received the film prints. “‘The Exorcist’ played for a year nonstop in theaters. More than a film, it was a cultural event of a kind we don’t really see too much today.”

While the films joined a robust collection at the Film Archive, the memoir materials mark a new kind of collection for Harvard — cinema memoir.

A gifted storyteller, Friedkin had no interest, at first, in sharing his own story. “I wouldn’t be interested in reading it,” he said. A friend and publisher urged him to reconsider, and the resulting memoir, “The Friedkin Connection,” demonstrates his professional acumen and shares highlights from his decades in Hollywood. “It’s about emotions, not facts,” Friedkin said.

“There is a tradition of memoir here at Harvard,” said Sarah Thomas, vice president for the Harvard Library and Roy E. Larsen Librarian for the Faculty of Arts and Sciences. “It’s so important to our students and faculty to have that available. We’re very honored to have a piece of Mr. Friedkin here.”

At an intimate gathering in Houghton Library, Friedkin gifted Harvard with the original documents for “The Friedkin Connection,” which utilized a unique creative process: Longhand writings were read aloud on tape, and then transcribed back to text. His use of multiple formats prompted extensive editing, and the written and taped manuscripts hold lots of unpublished material, now available for current and future researchers.

“This book, which chronicles his storied and extraordinary career, is a really valuable resource for students and researchers of American cinema and American popular culture in general,” explained Guest. “They are a great first step for Harvard to begin acquiring papers related to the cinema.”