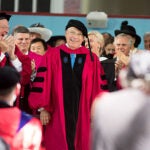 The Harvard Club of Dallas and the Harvard Club of San Antonio marked their centennials at a Texas-sized Your Harvard celebration last Friday with a gala dinner, bluegrass and piano performances, and remarks from Harvard President Drew Faust.

“A few years before the Dallas and San Antonio clubs were founded, one option, some would say an unthinkable option, existed: the Harvard, Yale, Princeton, and Columbia Alumni Association of Texas,” Faust told the crowd in Dallas. “But even then, in the words of one alumnus, ‘the Harvard spirit showed to excellent advantage.’ ”

Speaking to an audience of more than 500 alumni in a grand ballroom lit with a 60-foot screen as a backdrop and Crimson lighting throughout, Faust recounted the ways in which many extraordinary people at Harvard embody a greatness that is typical of the University.

“Harvard leaves an indelible mark,” she said. “It has educated and shaped leaders in countries around the world. It has nurtured novelists and scientific pioneers, jurists and composers, architects and actors, business leaders and spiritual leaders, physicians and public servants, scholars and teachers in fields too numerous to mention. All around us, we see examples of how Harvard helps build our society and better our world.”

Harvard, she noted, is where W. E. B. Du Bois explored ideas that would change our understanding of race in America, Mark Zuckerberg honed the algorithms that spurred the rise of social media, and Henry David Thoreau took his first course in philosophy.

The event was the latest in the Your Harvard series, a global array of events organized by the Harvard Alumni Association (HAA) that will take place throughout The Harvard Campaign. Alumni have already convened in London, Los Angeles, New York, and Mexico City to hear about the future of the University and discuss cross-disciplinary perspectives with faculty on the challenges facing society.

“One hundred years ago, the Guns of August had just fired, starting World War I,” he said. “And Harvard … had just received its first Nobel Prize, and Teddy Roosevelt was just retiring as the president of the Harvard Alumni Association.”

Noting that San Antonio was at that time Texas’ largest metropolis, Cooper — somewhat begrudgingly, but with good grace — celebrated the fact that Dallas had since surpassed his hometown in size and influence. “Dallas went on to become, of course, the amazing, exciting world-renowned city that it is today.”

Thanking Faust for her address, Cooper noted the fact that she was the first Harvard president who hailed from the American South since before the Civil War.

Betsy Urschel, a director emeritus of the Dallas Club, reciprocated the thanks to her fellow alumni from San Antonio and welcomed all to Big D.

Harvard’s engagement with, and in, Texas dates back more than a century, when students had to travel for days to get to the Cambridge campus. In the 1930s students scoured the northwest part of the state in search of fossils; an eight-foot Dimetrodon unearthed during one of these digs is now at Harvard’s Museum of Comparative Zoology.

But as Faust noted, digital learning is shrinking the distance between Texas and Cambridge. Since the launch of HarvardX two years ago, more than 20,000 Texans have participated in the dozens of online courses created by faculty from across the University.

Guitarist Shirey was celebrating three events: the two club’s centennials, his 27th birthday, and his performance one year ago at the Faculty of Arts and Sciences campaign launch. He and O’Connor recounted composing one of the songs they played during the evening in Kirkland and Quincy Houses. Other songs included bluegrass renditions of “Fair Harvard” and “10,000 Men of Harvard.”

Highlighting the importance of Harvard in her successful pursuit of her passion for bluegrass, Brown recounted her career transition from investment banking to professional banjo player.

“I kind of feel like living proof that you can do anything with a Harvard degree,” she remarked. “After I left Harvard, I went and earned an M.B.A. and got a job as an investment banker. I spent several years refunding tax-exempt bond issues. I found myself coming into the office sneaking in my copy of Bluegrass Unlimited magazine in my briefcase. And I’d hide it inside the Bond Buyer so it looked like I was reading about interest rates.”

But she was really reading about bluegrass music and dreaming of playing it in the South, a dream that came true when she “got up the courage” to move to Nashville to play banjo.

A Harvard connection also was key to the foundation 20 years ago of her record label.

“One of the things I have used my College degree for, and my M.B.A. for, was the creation of Compass Records, which is an independent music label specializing in folk music and bluegrass music and Celtic music,” Brown said. “And I started that company … on the heels of a very fortuitous meeting at the Harvard Club of Nashville, where I sat next to somebody who had been a graduate of HBS [Harvard Business School] who said, ‘If you ever want to start a music–related business venture, give me a call.’ ”

The Texas celebration continued Saturday, with a series of interactive faculty sessions on subjects including energy, the arts, urban planning, and online learning, featuring faculty members such as Daniel G. Nocera, Patterson Rockwood Professor of Energy, and Diane Paulus, the Tony Award–winning artistic director of the American Repertory Theater and professor of the practice of theatre.