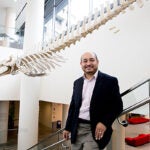 On Tuesday, Jessi Hanson arrived home from Liberia, where she had worked with children in Ebola quarantine. She was held for six hours as officials decided whether and how long she herself should be isolated.

Hanson, a 2007 alumna of the Harvard Graduate School of Education, was eventually released to 21 days of self-quarantine in her Washington, D.C., apartment. She is required to take her temperature twice daily and report the readings to health officials, and avoid public transportation and crowded places.

Hanson had traveled to Liberia after taking a monthlong leave from her job to volunteer for Playing to Live, a nonprofit focused on providing art and play therapy for quarantined children suffering the trauma of losing loved ones to the epidemic.

With an influx of aid beginning to take hold in West Africa and debate raging in the United States over quarantine for arrivals from the Ebola zone, the Gazette talked with Hanson on Wednesday about her work in Liberia and her thoughts on American screening and quarantine practices.

GAZETTE: Can you tell us why you decided to go to Liberia?

HANSON: I had lived in Liberia for about 2½ years, have a very strong love for the country, and a lot of friends there. When the outbreak happened several of my colleagues lost family members and were working in very difficult conditions. I just felt useless, like I wasn’t able to help them. So there were quite a number of us, expatriates who had come back to the U.S., who were searching out opportunities to volunteer or to get jobs back there.

GAZETTE: What did you do in Liberia this time?

HANSON: I was trying to get the project Playing to Live piloted and off the ground. I presented it to the Ministry of Health and Social Welfare for approval and for their input. We were able to form a partnership with them and work with ChildFund International and other organizations to examine conditions in the interim care centers, to see what the psychosocial needs were for children in isolation.

GAZETTE: Can you describe the care centers?

HANSON: An ICC, or an interim care center, is a child-friendly care center designed specifically for children under 18 who have been confirmed [as being] exposed to Ebola, meaning their parents, family members, or neighbors came down with Ebola, had tested positive for the disease, and died. The children were at high risk of having the disease in their blood.

GAZETTE: How did the kids do in the care center?

HANSON: The kids, on average … would demonstrate difficulties with having been separated from their parents and their communities. Some of them, on the same day they arrived at the care center, had just found out that their parents had died, or their siblings, so they were demonstrating very extreme trauma, which was expected.

One child refused to get out of the car that had brought him to the care center because he saw [workers] with the sprayer used for disinfecting people coming in. He kept begging us not to spray him. When we asked him why, he said, “You sprayed my ma and you sprayed my pa and they both died. And if you spray me I’ll die.” So they were just terrified coming in.

After a few days, when we would start art therapy with them, the kids just loved it. It was one of their favorite hours. … They’d go from being very sad or depressed to big smiles and laughing and interacting with each other during the session.

By the time I left, most of them had been in quarantine for 14 or 15 days. They were actually starting to like being in the center. Some were even joking that they didn’t want to leave the center; that they wanted their families to come live there.

GAZETTE: Did any of the kids go home while you were there?

HANSON: Not yet. They’ll be released next week.

We have a group of nine who have not demonstrated any symptoms. This Saturday they’re having a huge graduation ceremony. The ministry’s holding it and the kids will mostly be released, mostly to family, to whom we had to explain that they don’t have Ebola and they’re safe.

In Liberia, there’s the fear that, “Can this child bring it to my home and give it to me?” So a lot of families didn’t understand that, after 21 days, they’re Ebola-free. So the ministry sent social workers to explain to family members that these children are safe, they can be welcomed back.

Most of them will go home, but, sadly, we do have a number of children who lost all their immediate family members, and two or three who are having a real hard time reunifying with anyone in the community.

GAZETTE: Did any children in the center develop Ebola while you were there?

HANSON: We had one baby who came down with signs and symptoms on about Oct. 12. We noticed that he was sweating and he was starting to vomit and have diarrhea and he was not responding. We immediately separated the child from the other children and brought him to the ETU [Ebola Treatment Unit], where he was confirmed positive.

They were able to relocate his mother who was still in the same ETU, and the mother and child were reunified, but they, sadly, died together. And it affected the other children immensely.

HANSON: I was greeted with a lot of sympathy and kindness when I came in [to Dulles International Airport]. I was very honest that I had been in contact or indirect contact with the child who had passed on from Ebola. I was immediately red-flagged and sent to a room for about six very diligent hours.

But the CDC [Centers for Disease Control] and the U.S. government still don’t have protocols in place and they don’t really know what they’re doing. They said that several times: “This is new, we’re still learning.” And I just looked at them, confounded: How do you just not know? How do you not know how to rate somebody and know exactly how to respond?

It was really traumatic. It was not easy to sit calmly for those six hours and understand they were just trying to do the best they can. This is supposed to be the CDC. They should have this down.

GAZETTE: How are you feeling?

HANSON: In Liberia, you just don’t think about it. We all thought, we all had the risk that we were suspect and maybe have it, but when I got home and they were asking me questions, the reality that I could be a carrier started to hit.

It is very scary and for the first time I could almost empathize with the kids in the isolation ward. Up until this time, I just haven’t let myself go there.

[There are] 10 days that I really have to wait it out, because I did have contact with the baby that died and I’m only on day 12 at this point. So it’s terrifying, but it comes with the job.