In praise of the tweak 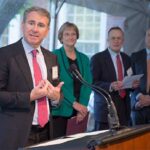 A grouping of chairs. A cluster of green. These are small things, acknowledges Robert Hammond, but they are the elements that make public space welcoming — and they are too easily overlooked. “People don’t think about their own public spaces enough,” said Hammond, a self-taught artist and community organizer best known for starting the movement that turned a deserted elevated rail line in New York City into a popular park. “Most people don’t understand the impact public space makes on their life.”

A visiting fellow at the Harvard Graduate School of Design, Hammond, co-founder (with Joshua David) of Friends of the High Line, is currently serving as the interim executive director of the elevated park, which debuted in 2009 and last month opened its third and penultimate segment. At Harvard for nine days, Hammond made time between lecturing, student meetings, and an open conversation with his faculty host, Professor Jerold Kayden, to stroll around and discuss the University’s open spaces.

“…The chairs give people reason to pause and enjoy the space, rather than just walk through this space that’s so Harvard. I’m here for a week, and I spent 45 minutes here yesterday instead of two minutes.” — Robert Hammond

Harvard Yard, the quintessential public space, won Hammond over, and he was full of praise for the relatively recent addition of the colorful chairs. “This space is perfectly designed by history,” said Hammond, the recipient in 2010 of the Rome Prize from the American Academy in Rome and (with David) of the Rockefeller Foundation’s Jane Jacobs Medal. He pointed out a father and daughter sitting and chatting, while a lone student read nearby, the bright chairs set off by the green lawn.

“There’s plenty of room for people to walk around,” he said. “But the chairs give people reason to pause and enjoy the space, rather than just walk through this space that’s so Harvard.” He added, “I’m here for a week, and I spent 45 minutes here yesterday instead of two minutes.”

By comparison, the plaza in front of the Science Center could do with “some tweaking,” Hammond said. With food trucks on both sides of the plaza, as well as benches, umbrellas, and an oversize chessboard, the space conveys “a confusing design message,” he said. “It’s just hard to read the space.”

While he praised the mostly movable furniture, Hammond suggested using colored chairs — one of the colors from the Yard — to “create a more inviting room.” “Multiple colors is too much,” he added. Additional plantings, as well, could be used to divide the open plaza into more intimate “rooms,” such as a dining area near the food trucks.

“Often people focus on active uses,” he said, citing a dance class he’d witnessed a day earlier, as well as the al fresco diners. “People want to maximize the amount of usable space.” His experience with the High Line, however, taught him that this focus can be shortsighted.

“The High Line is only 30 feet wide,” he said, “but we fought to keep the planting. Planting provides the magic for the experience. With the trucks here, planting could give it a more welcoming feel. On the High Line, you see people holding hands. There’s a slowing down because of the planting.”

Hammond was also intrigued by the Tanner Fountain, noting that its boulders could be another focus of attention — another outdoor “room” for public play. When the temporary ice-skating rink erected on the plaza was mentioned, he brought up another suggestion from his High Line experience. “We did a roller-skating rink under the High Line,” he said. “It was incredibly popular and brought in a really diverse group. People came from all over the city. It would be perfect for right there in the summer.”

The point, he stressed, was that little changes — a few more plants surrounding a seating area or a splash of color to enliven a corner — can make a difference.

“I’m sure even students in the GSD are thinking about lofty public space and public design on a huge scale,” he said. “But what makes more of an impact is often these small things that actually cost very little. Compared to the architecture of a building, the space around it may have more of an impact on the people using it.”