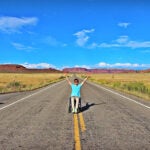 For decades, WHRB show has celebrated old-time and country-flavored music

The show, unknown to many in the Harvard community, has a devoted following in New England and beyond thanks to the advent of live streaming on the Web. Old-time music, bluegrass, traditional country, and contemporary artists such as John Prine and Iris DeMent (“We’re not the jet set; we’re the old Chevro-let set”) all get airtime in the eclectic but discriminating mix that characterizes the show.

Cousin Lynn, as Joiner calls himself on air, co-hosted the show with fellow Harvard alumnus Brian Sinclair ’62 from the 1970s until Sinclair died in 2002. Between queuing up songs, the two talked musical history, swapped anecdotes about artists, and bantered good-naturedly about what constituted true country, all with an infectious down-home humor that endeared them to their listeners.

Now Cousin Lynn hosts the show himself, though local musician Larry Flint lends a hand now and then, and other members of the extended Hillbilly family come by to play live or to add their particular perspectives to Joiner’s panoramic view of the country scene. The show is anything but scripted; Lynn’s enthusiasm, coupled with the unrehearsed, offhand comments of guests, makes for a spontaneous atmosphere that informs and entertains simultaneously.

On a recent Saturday, Mike Preston, a young singer from Maine, performed a few songs in the studio, accompanied by Bucky Mitchell, veteran member of the Bayou Boys band. Later, another acquaintance stopped in, Mike’s guitar started strumming, and suddenly the place was jumping, with backslaps and hugs all around at song’s end.

As the show neared its 1 p.m. end, Joiner read off a listing of upcoming concerts and benefits featuring local artists, punctuated with personal asides describing their music. Then he queued up a closing bluegrass number, clanged the old Nash hubcap with a metal church key, possibly from his Harvard student days, and signed off with, “Y’all stay Hillbilly now, hear!”