From Hogwarts to Harvard 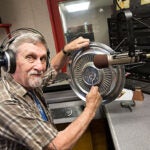 The sport of Quidditch finds a home outside the books

In the deathly hallows of the MAC Quad, the Harvard Quidditch team practices in the rain — tumbling through the mud while riding atop PVC broomsticks. Quidditch, the only coed contact sport offered at Harvard, is derived from the Harry Potter series and features a unique mix of elements from rugby, dodgeball, and handball. A Quidditch team is made up of seven athletes who carry brooms between their legs at all times. While the game can appear chaotic to the casual observer, once familiar with the basic rules, it’s exciting to watch and more exciting to play. Harvard’s team is one of 1,000 worldwide, and was founded by Stacy Rush and Alana Biden in 2009. The team practices twice a week and has regularly scheduled games as part of the Massachusetts Quidditch Conference, which includes Tufts, Boston University, Emerson, and Q.C. Boston. At the most recent Northeast Regional Championships, the Harvard Quidditch Team placed ninth in the region, and qualified for the World Cup held in April 2014 in South Carolina.

“The experiences I’ve had with the Quidditch team have been some of my favorite so far at Harvard,” said Ernest Afflu ’15. “It’s always a blast, whether we’re having a friendly scrimmage in practice or an intense game against another team. Some will find the game silly, but it’s very competitive, and a lot of fun.”