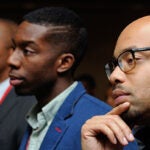 Challenges remain, but connections are key

Annual event brings together neighbors and Harvard for fun, food, and football

Hundreds of Cambridge and Allston-Brighton residents didn’t let Saturday’s weather dampen their spirits as they watched Harvard beat Cornell 24-7 as part of Community Football Day. The annual event, now closing in on 25 years, offered not only free admission to the stadium, but lunch, raffles, face painting, and more.

“You could say it’s a tradition,” said Renal Jean, assistant coach of the Bengals at Brighton High School, who brought about 20 of his varsity high school players to see the game. “I played for Brighton High myself, and my coach brought us every year, so I felt it was important to continue that tradition,” he said. “We bring the team to a Harvard game every year. Harvard does a lot to support us, so we feel like it’s important that we come out to support them.”

Before heading out into damp conditions, families gathered at the nearby community tent, which offered children’s activities, free hot dogs, and drinks. Members of the Harvard Dance Team were on hand, doing face painting and temporary tattoos for the kids.

Selena Li ’15, co-captain of the team, said volunteering at events like Community Football Day is crucial to establish a strong sense of community.

“That’s one of our goals as the dance team, to volunteer at events around Harvard and MIT and really build spirit for Harvard,” she said.

Stepping out of the rain, Alana Fisher cradled her 10-month-old son, Isaac, while her other son, 4-year-old Toby, colored in a drawing of a football player nearby.

“We thought we’d come check it out,” said Fisher. “My husband and I are from Australia, and we’d never seen a football game, so we wanted to see what it was all about.”

Pierre Villard, a Cambridge resident and visiting scholar in materials science and mechanical engineering at the School of Engineering and Applied Sciences (SEAS), and his wife were curious as well.

“We thought it was a good opportunity to see a game — this will be our first one,” he said, smiling.

“Community Football Day is a terrific way for Harvard to give back to our friends and neighbors, and for us all to enjoy a great game while we we’re at it,” said Kevin Casey, associate vice president for Harvard Public Affairs and Communications. “We were so glad to see so many folks come out, and we know the players and coaches who work so hard are inspired by the community support.”

Brighton High coach Jean added that coming to the game was a good way for his players to decide if they wanted to play at the college level.

“When they watch the game here at Harvard, they see what’s involved — how it’s at a whole other level,” he said. “It gives them a sense of what’s expected, and whether it’s something they want to pursue for themselves in the future.”
Despite the gloomy outset, Harvard not only beat Cornell, but Harvard Athletics partnered with the Allston-Brighton Food Pantry to hold a canned food drive during the game. A win-win for all.