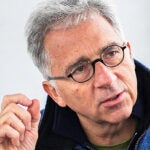 Research team shows treatment to be both effective and safe

A new form of gene therapy for boys with the life-threatening condition known as “bubble boy” disease appears to be both effective and safe, according to a collaborative research team Dana-Farber/Boston Children’s Cancer and Blood Disorders Center and other institutions conducting an international clinical trial.

Early data suggest that the therapy may help patients avoid the late-developing leukemia seen in a quarter of those with the disease in pioneering gene therapy trials in Europe more than a decade ago.

Eight of nine boys recruited to date into the trial are alive between 12 and 38 months after treatment, with none of the infections associated with the disease, more formally known as X-linked severe combined immunodeficiency syndrome (SCID-X1), the research team reported Thursday in the New England Journal of Medicine (NEJM).

Gene therapy alone generated functioning immune systems in seven of the eight. Genetic studies of the boys’ new T-cells, which are critical components of the body’s immune system, reveal that the viral vector used to deliver the gene therapy did not lead to an expansion of cells with vector insertions near known cancer-causing genes, raising cautious hopes about the vector’s long-term safety. One child died of an overwhelming infection present at the time gene therapy began. Left untreated, boys with SCID-X1 usually die of infection before their first birthday.

The investigators will continue to monitor the patients for any signs of treatment-related leukemia for 15 years. In the prior European trials — which were the first to demonstrate gene therapy’s potential to cure a disease — leukemia appeared two to five years after treatment. This outcome was one of several events that together slowed clinical progress in gene therapy for many years.

The modified vector created for the current trial is a self-inactivating gammaretrovirus, designed to deliver its payload effectively while minimizing the chance of inadvertently turning on genes, called oncogenes, which could lead to leukemia.

“Our goal was to take the molecular data from the prior trial and use it to produce a vector that would remain effective and at the same time reduce the risk of leukemia,” said David A. Williams, HMS Leland Fikes Professor of Pediatrics, chair of the hematology/oncology division at Dana-Farber/Boston Children’s Cancer and Blood Disorders Center, director of clinical and translational research at Boston Children’s Hospital, principal investigator for the gene therapy trial’s U.S. sites, and corresponding senior author of the NEJM paper.

“The efficacy data from our study is clear: The vector does work to correct the disease. And by a surrogate endpoint, we have improved the treatment’s safety, although it’s too early to say that we’ve completely eliminated the long-term risk of leukemia,” he said.

After a single round of treatment, six of the seven boys for whom the gene therapy was successful had achieved the trial’s primary efficacy endpoints: a T-cell count greater than 300 cells per microliter of blood and T-cell proliferation in response to stimulation with phytohemagglutinin (a test used to measure T-cells’ ability to react to pathogens).

“Only a minority of babies with SCID-X1 have the optimal donor for standard transplant, a brother or sister who is tissue-type matched,” said co-lead author Sung-Yun Pai, assistant professor of pediatrics at HMS and a pediatric hematologist/oncologist at Dana-Farber/Boston Children’s. “For the rest, gene therapy is a therapeutic option that avoids the need to find an alternative donor and avoids complications of allogeneic transplant such as graft-versus-host-disease.”

The core question of the trial was whether the new self-inactivating viral vector could safely and successfully shuttle a gene called the IL-2 receptor gamma (IL2RG) subunit into the patients’ hematopoietic stem cells. In boys born with SCID-X1, mutations render the IL2RG gene inactive, robbing the children of the ability to produce a functional immune system.

“This trial represents the best in collaborative efforts from a number of the leading gene therapy centers worldwide that allowed us to accomplish its goals in a relatively short period of time,” Williams said. “The success of the trial was also critically dependent on funding from the National Institutes of Health.”