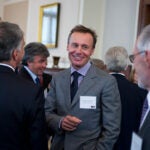 “I’m staggered by the diversity still,” said Maude Baldwin, looking into the display cases along the walls of the balcony in the Harvard Museum of Natural History’s Great Mammal Hall.

Inside are not mammals, but birds: some 750 specimens, cleaned and brightly lit, displayed in all their variety and splendor.

There are rails and wrens, hummingbirds and hawks, parrots and plovers, representatives of more than 180 families covering nearly all the world’s bird diversity. “Birds of the World,” a permanent exhibit, opened in September after months of design. It replaces the longstanding “Birds of North America.”

The prep work included refurbishing the display cabinets, vacuuming years’ worth of dust from the feathers, restoring the eyes to a new shine, and using lighting to bring back the color and radiance of the plumage.

“They looked brown and drab,” said Jennifer Berglund, an exhibit developer and writer who worked with Baldwin on the exhibition. “They have this incredible iridescence that you can’t see unless you clean and light them properly.”

The new exhibit is more ambitious than the old, drawing on the Museum of Comparative Zoology’s vast collections — some 350,000 bird specimens — to populate the cabinets. The MCZ is one of the three institutions that make up the Harvard Museum of Natural History, which itself is part of the Harvard Museums of Science & Culture.

Jane Pickering, executive director of the Museums of Science & Culture, thanked the donors for the gift — given in memory of Melvin R. Seiden, who graduated from the College in 1952 and from Harvard Law School in 1955 — that made the new exhibit possible. Renovations of the Museum of Natural History’s zoological galleries are nearly complete, said Pickering, who added that she is also looking forward to renovation of its fossil galleries.

“We’re thrilled that thanks to this generous donation we have been able to renovate the historic bird balcony. Since we reopened the Great Mammal Hall in 2009, we have wanted to give the MCZ’s spectacular bird collection the exhibit they deserve, and one that reflects current scientific understanding of bird relationships.”

Baldwin, a doctoral student studying hummingbirds, helped apply the latest findings on birds to organizing the displays. The result is an exhibit that highlights the current understanding of avian relationships, from the basal ratites that split off from other birds relatively early in their history to the late-evolving and rapidly diversifying passerines, among which are more than half of all bird species.

The work also notes the scientific consensus that birds are descended from theropod dinosaurs — and in fact are the last living dinosaurs — and that reptiles like crocodiles are their closest living relatives.

Baldwin and Berglund put in many hours from spring through summer, diving into the tall job of incorporating the collection’s specimens and up-to-date research into aesthetically pleasing displays. Fitting all the specimens into the cases often felt like an avian version of Twister, they said.

“It was such a fun project to work on,” Baldwin said. “It is both beautiful and correct.”

The pair said they hope visitors will be impressed by the sheer diversity on display, appreciate the evolutionary forces at work, and gain a greater understanding not just of the connections among birds — their phylogeny — but also of their relationships to the parts of the world where they live, their biogeography.

“Here you have it right in front of you,” Berglund said.