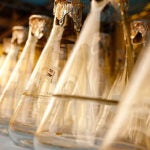 Funding for projects with promise

Harvard’s Andrew Murray has been named a Howard Hughes Medical Institute (HHMI) professor and will receive $1 million in funding over a five-year period.

In addition to the grant, Murray, who is the Herschel Smith Professor of Molecular Genetics, professor of molecular and cellular biology, and director of the Faculty of Arts and Sciences’ Center for Systems Biology at Harvard, will be a permanent member of the community of HHMI professors.

Murray will use his grant to support the training and hiring of teaching fellows for an experimental class scheduled to launch next fall. Freshmen with a serious interest in the sciences will be invited to apply (enrollment is limited to 25 students) for the yearlong “double-course,” which will include different branches of science being taught simultaneously with related topics in mathematics and statistics.

“Science used to be taught as a single domain, but during the 19th century, teaching biology, chemistry, and physics as separate disciplines became entrenched,” Murray explained.

That change, Murray believes, was a mistake, in which he pointed out that solving scientific problems requires the ability to connect apparently disparate pieces of information and draw on concepts from different disciplines.

“We want to teach students to think in a way where disciplinary boundaries are as invisible to them as we can make them be,” Murray said. “Students need tools from different places, but they also need discipline to know how to use those tools.”

Murray and colleagues first conceived the course after observing that advanced science students were forgetting mathematics and statistics concepts they’d already studied — concepts crucial to solving scientific problems — because they had not been taught in a way that resonated with scientific practices.

“Our goal is to weave things together in an interesting and exciting way so the material sticks,” said Murray. “I ask myself, ‘What would I like my students to remember in five years?’ That, to me, is the purpose of education.”

Labs will be different, too. Unlike traditional undergraduate science courses, where classical experiments are repeated, students will undertake experiments without knowing the answers in advance. To prepare for this type of original work, students will participate in “boot camps” in computer programming, will learn the basics of how to run experiments, and will have 24/7 access to laboratory facilities.

Murray is excited to see the results of the educational experiment, and believes it ultimately has the power to transform how science is taught at Harvard.

“I learned a lot about assessment in our HHMI orientation and plan to integrate it to measure not only how much students retain, but whether or not this integrated style of teaching could effectively be applied in larger, mainstream undergraduate science courses.”