A wake-up call on Ebola 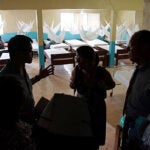 The Dallas Ebola case has provided a wake-up call for hospital emergency room workers across the country, putting them on alert for unexplained fevers, after a Liberian man who traveled to Texas sought care when he fell ill with the disease, but was sent home.

Michael VanRooyen, vice chairman of the Emergency Medicine Department of Harvard-affiliated Brigham and Women’s Hospital and professor of medicine and of global health and population at Harvard, said the case last week did not cast emergency personnel in a favorable light, but he added that something positive may come from it in the form of an alarm bell sounding for medical personnel nationally.

Federal and state health officials have scrambled to locate, evaluate, and, in some cases, isolate people who came in contact with the man. After initially going to the hospital, being given antibiotics for a vague ailment and being sent home, the man returned to Texas Health Presbyterian Hospital two days later, severely ill, and was diagnosed with Ebola. He was admitted and remains in the hospital.

VanRooyen and David Heymann, a British physician and former World Health Organization official who investigated the first Ebola outbreak in 1976, agreed Thursday during a panel discussion at the Harvard T.H. Chan School of Public Health (HSPH) that it is unlikely the Dallas case, which was the first diagnosed in the United States, would result in a broader outbreak.

That’s because, they said, there is a much higher level of health education among the general population here than in West Africa, a much stronger health care system, and health care workers here — despite the early stumble — will take more aggressive action to isolate the sick, and track and monitor anyone who may have been exposed.

The panel discussion also featured Stephen Gire, a researcher in Harvard’s Department of Organismic and Evolutionary Biology who studies the Ebola genome, and Barry Bloom, former HSPH dean, Harvard University Distinguished Service Professor, and Julius H. Jacobson Professor of Public Health. “The Ebola Disaster: How Did We Get Here and What’s Next?” was sponsored by The Forum at Harvard School of Public Health in collaboration with National Public Radio (NPR). It was moderated by Joe Neel, NPR’s deputy senior supervising editor.

Much of the discussion focused on the West African epicenter of the outbreak, with panelists evaluating the early response (too slow), the possibility of virus mutation (low but present), and possible improvements that might spring from the outbreak (stronger health systems).

Gire, who has traveled to the epidemic nations of West Africa several times to conduct genetic research, said the virus has mutated, but does so fairly slowly — good news for those working on vaccines and diagnostic tests. The much-feared and speculated-upon possible mutation to an airborne virus, which would make it far more infectious, is highly unlikely, Gire said, because that sort of a mutation is not in the basic biology of the virus. He said it would be akin to a rat developing a mutation that gives it wings.

Still, Gire said, mutations can happen and could affect parts of the genome targeted in diagnostic tests, for example, potentially rendering such tests useless and resulting in infected people being sent home, where they could infect others. That’s why, he said, regular genetic testing and monitoring of the virus itself is among the epidemic’s many unmet needs.

Ebola epidemics are “terrible sights,” horrible even for those who survive them, Heymann said. He said that the three key actions that were effective in earlier outbreaks remain priorities today: identification and isolation of the sick, contact tracing to identify possible new cases, and community education and involvement.

With so many people infected in urban areas and the disease spreading rapidly in poor districts, Heymann acknowledged that the situation is far more complex than that in earlier outbreaks, which occurred in rural areas and were much more easily contained. The campaigns against the virus have to be led and coordinated by governments in the nations where the epidemic is occurring, but they need ample support from the international community to succeed, he said.

After a long, deadly delay, the international response has been ramping up in recent weeks, but panelists said it still will be some time before such efforts are organized, launched, in place, and begin to prove effective.

VanRooyen said that home care — providing people with training and support to take care of stricken loved ones where they live — is an option that should receive much greater emphasis. Heymann agreed, saying that a recent Ebola outbreak in the Democratic Republic of the Congo was contained using a strategy that isolated patients in their homes, and provided support and daily monitoring until the danger of infection passed.

Panelists agreed that eventually the health care systems of the affected nations will emerge stronger. Bloom said that ambassadors from several African nations who attended a recent summit hosted by the Harvard Humanitarian Initiative said their greatest need is not international personnel who fly in, treat patients, and fly home, but training for their own medical personnel. Heymann agreed that training and strengthening health care systems is critical, and pointed out that they were called for in a 2005 international agreement signed by 194 nations, and then ignored.

“There has to be some good out of the horror that’s being experienced right now,” Heymann said.