A student call to service 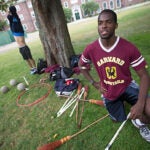 From Hogwarts to Harvard

Presidential fellows relate their experiences, tout opportunities to help others

Michael Hughes ’15 called himself “a city slicker from the East” when he arrived in Gallup, N.M. It was summer, and Hughes was out of his element. “I hadn’t spent much time in a desert before,” he said.

But Hughes settled in at the Gallup Indian Medical Center, where he got a firsthand look at the medical challenges facing Native American populations, particularly HIV.

In an annual luncheon with President Drew Faust on Wednesday, the fellows shared their experiences with Faust and with fellowship selection committee members, including Assistant Dean of Student Life for Public Service Gene Corbin, Vice President for Strategy and Programs Leah Rosovsky, Associate Dean for Planning and Outreach Keith Collar, and Institute of Politics Executive Director Catherine McLaughlin.

Faust pressed the students on the surprises they found. In their unexpected encounters, she noted, “You often find dimensions of yourself that you didn’t know you had, and I think those lessons are really important.”

Severson flew south to Washington, D.C., where he served as an adviser in the Department of Defense. He quickly learned of outdated intelligence laws, and found his efforts focused on those.

“They gave me a lot of responsibility, and it was a challenge,” admitted Severson, who is a research assistant to Sultan of Oman Professor of the Practice of International Relations Nicholas Burns.

Dwinal’s grandmother injured herself while Dwinal was an education policy and programming fellow at DonorsChoose.org, and Dwinal found herself working remotely to care for her grandmother in rural Illinois.

Rodriguez was working as a legislative aide for the city and county of San Francisco Board of Supervisors when he found himself on the front line of coordinating the city’s strategy for addressing the needs of hundreds of immigrant children fleeing conditions of violence and poverty in Central America.

“In public service, no amount of preparation and foresight can prepare you for a public crisis like that,” he said. “You just have to be able to respond on the fly.”

Faust used the conversation as an opportunity to garner feedback about the fellowship program and about how to better engage students and promote public service at the University.

Shang, an intern in mass incarceration reform at the American Civil Liberties Union, said students often don’t choose careers in public service because it lacks an “element of prestige” in comparison to other jobs.

Dwinal said more students would benefit from encouragement by the University to enter public service instead of powerful firms or Wall Street. She said the expectations are so high for Harvard graduates that they often feel pressured to pursue prestige over service.

The students agreed that their fellowships lived up to the promise “to learn what it is to do public service and use it to inspire us for our career,” said Hughes.

Already, Rodriguez has plans to run for office in San Francisco.

“That’s great!” said Faust. “Will we get buttons?”