A read on seawater sulfate 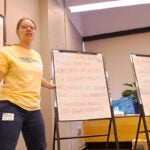 The ocean is often depicted as teeming with life, from crustaceans and fish to whales and other mammals, but in fact large swaths of it are virtual deserts, populated only by bacteria and a handful of particularly hardy species.

Prime examples of such bacterial hot spots are oxygen minimum zones, regions that play a key role in biogeochemical cycling, but remain difficult for scientists to study.

In an effort to better understand those cycles, John L. Loeb Associate Professor of the Natural Sciences David Johnston, Ph.D. student Andrew Masterson, and research assistant Erin Beirne worked with colleagues to develop a tool to measure levels of seawater sulfate in situ, giving researchers a clearer picture of how much sulfur cycling is taking place in oxygen minimum zones. The work is described in a recent paper in Nature.

“In these regions, as soon as the oxygen goes away, it’s all these other biogeochemical cycles that become very interesting,” Johnston said. “The challenge has been in trying to find a way to go in and make a measurement in these environments, or to do indirect experiments to get at the rates of cycling and what is actually happening in terms of the chemistry.”

Until recently, Johnston said, questions of how microorganisms in oxygen minimum zones absorbed and metabolized nitrogen had received the lion’s share of attention among scientists. In recent years, however, a growing number of researchers have begun to suggest that while nitrogen plays a big role in these regions, the sulfur cycle is far more important.

To get at that question, Johnston and colleagues developed a tool that uses oxygen isotopes to indicate how much sulfur cycling is occurring.

“The way the cycle works is sulfate, which consists of one sulfur atom and four oxygen atoms, is reduced to sulfide, which has no oxygen atoms, and can then be fully re-oxidized back to sulfate,” Johnston said. “What we’ve developed is an isotope tool — what we can do is measure the oxygen isotopic composition of seawater sulfate in these regions, and use that as a measurement to assess how much cycling is going on.”

Armed with a data set made up of hundreds of previously published measurements, Johnston and Masterson used the tool to create a simple model outlining how the sulfur cycle works in a water column.

“We came up with a solution that’s both very exciting and points toward the need for additional work,” Johnston said. “The exciting part is it’s a quantifiable signal, it can be measured in situ, and it should be very, very robust. The part that needs more work is that it depends on how long the water sits in that zone, and that’s one of the greatest outstanding questions in these environments.”

“If you have particles sinking at a constant rate, your ability to pick up that signal depends on how long that water spends in contact with those particles,” Masterson said. “If water is cycling through very quickly, it’s not going to have a chance to reduce that sulfate.”

The end result, Johnston said, is that while their tool works, it comes with the caveat that results can vary depending on how long researchers assume water stays in the oxygen minimum zone.

If researchers assume a longer residence time, the tool shows that previous estimates of sulfur cycling were grossly overestimated, he said. Shorter residence times show the estimates could be possible, but other factors suggest that they may still be unlikely.

“Ultimately, the math dictates that it’s all a function of how long the water sits there,” Johnston said. “Going forward, we need to hone in on those bounds, because it’s still possible sulfur is a big player.”