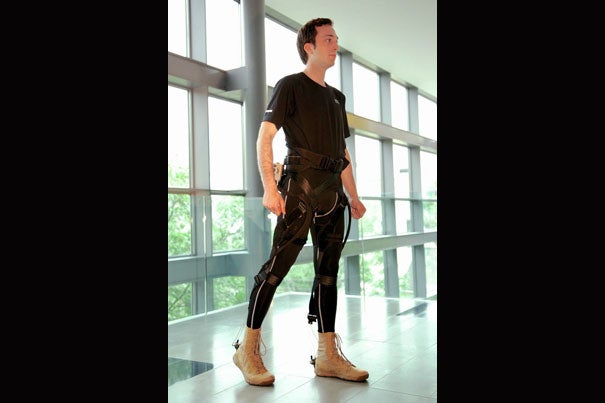 Things can go downhill fast when a patient has sepsis, a life-threatening condition in which bacteria or fungi multiply in the blood — often too fast for antibiotics to help. A new device inspired by the human spleen and developed by a team at Harvard’s Wyss Institute for Biologically Inspired Engineering may radically transform the way doctors treat sepsis.

The device, called a “biospleen,” exceeded the team’s expectations with its ability to cleanse human blood tested in the laboratory and increase survival in animals with infected blood, as reported in Nature Medicine. In a matter of hours, the device can filter live and dead pathogens from the blood, as well as dangerous toxins that are released from the pathogens.

Sepsis kills at least 8 million people worldwide each year and it is the leading cause of hospital deaths. “Even with the best current treatments, sepsis patients are dying in intensive care units at least 30 percent of the time,” said Michael Super, senior staff scientist at the Wyss Institute. “We need a new approach.”

Sepsis occurs when a patient’s immune system overreacts to a bloodstream infection, triggering a chain reaction that can cause inflammation, blood clotting, organ damage, and death. It can arise from a variety of infections, including appendicitis, urinary tract infections, skin or lung infections, as well as contaminated IV lines, surgical sites, and catheters.

Identifying the specific pathogen responsible for sepsis can take several days, and in most patients the causative agent is never identified. If doctors cannot pinpoint which types of bacteria or fungi are causing the infection, they treat sepsis patients empirically with broad-spectrum antibiotics — but these often fail, and in many cases can trigger devastating side effects. The challenge of treating sepsis continues to grow more complex as the prevalence of drug-resistant bacteria increases and the development of new antibiotics lags.

“This is setting the stage for a perfect storm,” said Super, who was part of the team led by Wyss Institute Director Don Ingber that also included Wyss Institute Technology Development Fellow Joo Kang and colleagues from the Harvard-affiliated Boston Children’s Hospital and Massachusetts General Hospital, and Harvard Medical School.

Kang, who is also a research associate at Harvard’s School of Engineering and Applied Sciences (SEAS) and a research fellow in the Vascular Biology Program at Boston Children’s Hospital, set out with the team to build a fluidic device that works outside the body like a dialysis machine, removing living and dead microbes of all varieties, as well as toxins. They modeled it after the microarchitecture of the human spleen, an organ that removes pathogens and dead cells from the blood through a series of tiny interwoven blood channels.

The biospleen is a microfluidic device that consists of two adjacent hollow channels connected to each other by a series of slits. One channel contains flowing blood, and the other has a saline solution that collects and removes the pathogens that travel through the slits. Key to the success of the device are tiny nanometer-sized magnetic beads coated with a genetically engineered version of a natural immune system protein called mannose-binding lectin (MBL).

In its innate state, MBL has a branchlike “head” and a stick-like “tail.” In the body, the head binds to specific sugars on the surfaces of all sorts of bacteria, fungi, viruses, protozoa, and toxins, and the tail cues the immune system to destroy them. Sometimes other immune-system proteins bind to the MBL tail and activate clotting and organ damage, however, so Super used genetic engineering tools to lop off the tail and graft on a similar one from an antibody protein that does not cause these problems.

The team then attached the hybrid proteins to magnetic beads 128 nanometers in diameter — approximately one-five hundredths the width of a human hair — to create novel beads that could be added to the blood of an infected patient to bind to the pathogens and toxins without first having to identify the type of infectious agent. The sepsis device has a magnet that then pulls the pathogen-coated magnetic beads through the channels to cleanse the blood flowing through the device before the blood is returned to the patient.

The team first tested their system using human blood in the laboratory that was spiked with pathogens. They were able to filter blood much faster than ever before, and the magnets efficiently pulled the pathogen-coated beads out of the blood. In fact, more than 90 percent of key sepsis pathogens were bound and removed when the blood flowed through a single device at a rate of about one-half to one liter per hour, and many devices can be linked together to reach levels required to clean human blood at dialysis-like rates.

Next the team tested the device using rats infected with E. coli, S. aureus, and toxins — mimicking many of the bloodstream infections that human sepsis patients experience. Similar to the tests on human blood, after just five hours of filtering, about 90 percent of the bacteria and toxins were removed from the rats’ bloodstream.

“We didn’t have to kill the pathogens. We just captured and removed them,” Super said. What’s more, 90 percent of the treated animals survived compared with 14 percent of the controls — and sure enough, thanks to the team’s modified MBL, the immune system had not overreacted.

“Sepsis is a major medical threat, which is increasing because of antibiotic resistance. We’re excited by the biospleen because it potentially provides a way to treat patients quickly without having to wait days to identify the source of infection, and it works equally well with antibiotic-resistant organisms,” said Ingber, who is the Judah Folkman Professor of Vascular Biology at Harvard Medical School and the Vascular Biology Program at Boston Children’s Hospital, as well as professor of bioengineering at SEAS. “We hope to move this towards human testing to advancing to large animal studies as quickly as possible.”