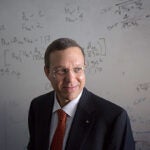 With longer and hotter heat waves in the offing, a Harvard professor has put the urban “heat island” under the microscope, finding smaller heat islands — mainly occupied by the poor — within city limits, and identifying features that could counter their effects.

Hurricane Sandy’s toll on New York and New Jersey brought into stark relief the threat that rising sea levels pose to urban areas, sending officials around the world scrambling to begin efforts to mitigate climate change. But Joyce Klein Rosenthal, an assistant professor of urban design, said it would be a mistake if those plans focused on coastal storms and sea level rise to the exclusion of heat waves.

The deadly potential of heat waves has become clearer in recent years, most strikingly through an August 2003 heat wave in France that caused an estimated 14,800 excess deaths. Further, climate modelers believe that by 2050, heat-related deaths may be up 70 percent in the New York City region alone.

What that means, Rosenthal said, is that it’s important to think about ways to cool the city’s hot spots, as well as protect its coastal communities and move utility connections out of the basement.

“Everyone in the design community was galvanized by Sandy and we absolutely need to work on coastal solutions, but we also have to be mindful that sea level isn’t the only threat,” Rosenthal said.

The new study is one of the few to examine the effects of extreme heat within New York. Published in the journal Health and Place, it was conducted by Rosenthal, Patrick Kinney from Columbia University, and Kristina Metzger, formerly of the New York City Department of Health and Mental Hygiene.

The report analyzed heat-related mortality rates in residents over 65 among 59 New York community districts and 42 United Hospital Fund neighborhoods between 1997 and 2006. Citywide, it found a 4 percent increase in deaths on the hottest days, those with a heat index of 100 or greater. The deaths were unevenly distributed, however, with higher rates in neighborhoods in the southern and western Bronx, central Brooklyn, northern Manhattan, and the eastern side of midtown.

“It’s very important to recognize that designers, architects, and urban planners have the capacity and agency to improve urban conditions. What’s exciting to me is that, through intra-urban analysis of the effects of place on health, we can focus on modifiable exposures. If we understand the finer-scale spatial and social patterns of vulnerability within cities, we have a better chance at implementing more effective adaptive strategies with communities.”

To be sure, Rosenthal said, several cities — New York among them — have taken steps to ease the heat for vulnerable residents, with longstanding programs to distribute fans and air-conditioners and open cooling centers on the hottest days. Some cities have developed “cool roofs” projects and building code requirements that encourage re-covering acres of black tar roofs with light-colored materials that mitigate rather than intensify the heat.

The study provides data to support such efforts, and to add trees and parks to the built environment, Rosenthal said. Some interventions can be as simple as putting bars on windows, so that elderly residents feel secure enough to open them. Other programs that give residents a break on electric bills can encourage the use of air conditioners.

“Studies like this provide health outcome-related evidence supporting adaptive interventions,” Rosenthal said. “We have health disparities in the spatial distribution of excess mortality of seniors during heat events. The types of characteristics we found to be associated [with that mortality] are within the collective ability of municipalities to intervene.”

Rosenthal framed heat as another environmental pollutant, disproportionately affecting the poor and communities of color.

“Heat, like ground-level ozone, is an environmental stressor, unevenly distributed in places where there are less trees, less green space, and associated with poorer housing quality,” Rosenthal said. “At every scale [examined], income levels are associated with surface temperatures. Poorer neighborhoods are hotter; wealthier neighborhoods are cooler. Urban design strategies can make a difference in reducing urban micro-heat islands.”

Rosenthal said an aging population, a hotter climate, and a lack of affordable housing, if not addressed, may constitute a “perfect storm” for future heat wave deaths.