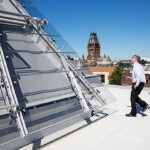 For two centuries, the University hugged the ground; then, its buildings began to soar

Over its first 200 years, Harvard soared academically, but its architecture stayed low. In keeping with the modesty of Puritan traditions, Harvard Yard remained a huddle of low-roofed structures until the 19th century.

Historians speculate that Peyntree House, the College’s first home in 1638, was just 2½ stories high. Inside there was just one set of stairs. Outside was a steep roof more suited to thatch than to shingle. The building’s sole eminence, a central chimney, was utilitarian.

And for centuries Harvard stayed horizontal. The first Harvard Hall (1682) was three wooden stories topped by a squat cupola and a weathervane. Massachusetts Hall (1720) was four stories of stout brick. The second Harvard Hall (1766) was a bookend of the same height. Hollis Hall (1761) was Puritan plain, an “honest old frame,” said one 19th-century commentator. Stoughton Hall (1804) too was a blunt brick box.

Then up, up went Gore Hall in 1838: a Gothic wedding cake of sky-poking spires modeled after a 15th-century chapel at Cambridge University. In 1856, Appleton Chapel shot into the air too, with a steeple as pointed as a dagger. Then Puritan modesty reasserted itself. Boylston Hall (1857) was built short and square, two stories of granite later capped with a mansard roof. Grays Hall (1863) was taller, but modest, with rounded rooflines that seemed to defy verticality. It had a bunkered appearance, befitting a building that went up quietly during the Civil War.

But during the joy and hubris of the post-war years in America, architectural Harvard took another vacation from modesty. Matthews Hall opened in 1873: five stories layered with Gothic ornamentation and topped with a roofline of gabled windows. Then came the most immodest building of all, the one that definitively began modern vertical Harvard. Memorial Hall (1875-1878) was an extravaganza of high-Victorian Gothic style. It had a 210-foot tower, 5,000 square feet of stained glass, intricate slate roofing, and copper-sheathed gargoyles. Novelist Henry James called it “a great, bristling, brick Valhalla.”

Harvard never went horizontal again. After 1878, the University awoke to its verticality, gaining a sense of itself as important to the nation and to the world. By the 1930s, the new river Houses added towers to Harvard’s now iconic waterfront skyline. Their towers were outward signs of both the University’s transformed aesthetics and its accelerating aspirations.

“Towers are largely about beauty,” Chicago Tribune architecture critic Blair Kamin, a 2013 Nieman Fellow, wrote in an email. “They’re also about advertisement, whether for a corporation or a college or a country.” Harvard’s era of building towers, he added, was about “projecting an identity.”

By 1932, Appleton Chapel had been razed to make room for Memorial Church, whose gleaming spire still points to the heavens. For both secular and sacred architecture, wrote Kamin, “Towers lift us above the profane (the ground) and toward the sacred (the sky). It’s hard to imagine Harvard without its towers.”