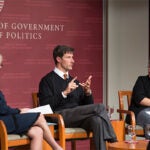 A Harvard Stem Cell Institute (HSCI) study comparing how blood stem cells and leukemia cells consume nutrients found that cancer cells are far less tolerant of shifts in their energy supply than their normal counterparts. The results suggest there could be ways to target and kill cancer cells without affecting healthy cells.

HSCI scientists at the Massachusetts General Hospital Center for Regenerative Medicine and the Harvard University Department of Stem Cell and Regenerative Biology led the work, in collaboration with researchers at the Koch Institute for Integrative Cancer Research at the Massachusetts Institute of Technology. The work was described in an article published today in the journal Cell.

“It’s been known for decades that cancer cells use energy differently than most cell types,” said senior author David Scadden. “So we thought, maybe there are metabolism differences between blood stem cells and their immediate descendants. And are they so different from cancer that you might be able to manipulate energy sources with something that could have an effect on cancer and not harm normal cells?”

Scadden’s team began by examining blood stem cells and their direct offspring: blood progenitor cells that have a more limited ability to differentiate. The researchers modified the way the cells took up nutrients in two ways: via a glucose (sugar) on-off switch, and through subtle adjustments that raised or lowered glucose like a volume dial. The researchers found that turning off the glucose switch caused stem cells to die, while dialing up the glucose volume affected normal energy production in the offspring cells, in some ways for the better.

“That was an interesting distinction between these two cell types,” said Scadden, the Harvard University Gerald and Darlene Jordan Professor of Medicine. “They have very different functions, and you might imagine they’re going to use their nutrients very differently, but nobody had defined that before.”

The investigators next introduced genes that had been corrupted to cause the parental blood stem cells and their offspring to become cancerous (these respectively give rise to chronic and acute leukemia), and subjected the cancer cells to the same glucose manipulations as their normal counterparts. The team found that regardless of which cell they started in, the leukemia cells were sensitive to both the glucose on-off switch and the volume dial.

“One of the major hurdles for cancer therapy is that while the drugs are effective in killing cancer cells, they are toxic to normal cells,” said study first author Ying-Hua Wang, a postdoctoral fellow in the Scadden Lab. “In this study, we found a way to differentiate sensitivity between normal and malignant cells, suggesting a potential therapeutic angle.”

“Cancer cells are not like normal cells in a lot of ways, but one … is that they get locked into a particular way of behaving,” Scadden said. “These cells are so singular in the way they handle glucose that they create a unique opportunity to intervene. Normal cells don’t get so disrupted because they have other energy mechanisms in place.”

Private companies have been developing drugs that target cancer metabolism, but primarily in solid tumors. Scadden hopes that this study can open the door to industry partnerships and the generation of new treatments. More research will be needed to determine whether non-blood cancers have similar differences in metabolism sensitivity.

The work was funded by the National Institutes of Health, the American Cancer Society, Massachusetts General Hospital, the Proton Therapy Research and Treatment Center, BD Biosciences, a Bullock-Wellman Fellowship, a Tosteson & Fund for Medical Discovery Fellowship, the Smith family, the Stern family, the Burroughs Wellcome Fund, the Ludwig Foundation, and the Damon Runyon Cancer Research Foundation.